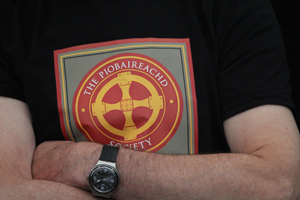 The Piobaireachd Society has released its annual list of piobaireachds set for the solo piping competitions at the Northern Meeting and Argyllshire Gathering at Inverness and Oban, Scotland, respectively. Competing pipers will be faced with choices from lists of well-known and more obscure tunes. Various other competitions around the world also choose to use the lists for their events.

“The aim is to try and strike a balance between better and less-known tunes overall,” said Piobaireachd Society President Jack Taylor. “The Senior and Gold lists have less-known tunes compared with this year and last, whereas the opposite is true for the Silver Medal, containing the likes of ‘The King’s Taxes,’ ‘Desperate Battle of the Birds’ and ‘MacCrimmon’s Sweetheart.’

“The Senior list is notable for its inclusion of ‘modern’ tunes, and the Gold for recommending Gesto and MacArthur settings from the new edition of the Piobaireachd Society Collection Book 10. We regard these settings as much better than those of the same tunes (“War or Peace” and “The MacLeans’ March”) in the old Book 10. Also “The Brother’s Lament,” found only in the John Smith MS, and published in book 16 is a very fine tune.”

“While it’s true that these tunes only involve a small number of pipers, their influence spreads wider, as they are often taught and taken up by many more,” Taylor added about the lists overall, referring to the fewer than 75 pipers worldwide who might actually work with the lists.

This year, pipers competing in the Silver Medals have to choose from lists of similar old/new/obscure variety.

The Piobaireachd Society’s usual caution about deviating from recommended settings was softened in their statement to read: “Competitors are not restricted to settings in the Piobaireachd Society Collection and Kilberry Book. Those who wish to play alternative settings should submit legible scores, indicating the origins of the settings, to competition organizers along with their tune selections.”

Interested pipers – and drummers, too – can check out known settings to most of the tunes above in the pipes|drums Set Tunes Series by Dr. William Donaldson, which now numbers more than 160 compositions, each with various renditions and analysis by Donaldson.