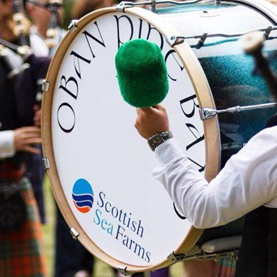 Scottish Grade 2 bands continued their off-season of leadership changes, with a flurry of activity in the last week.

Today, the Oban Pipe Band revealed that it has appointed Daniel Johnstone and Alan Irvine taking over as pipe-major and lead-drummer, respectively, with James Rosie being made pipe-sergeant.

A pupil of piping greats Ronald Lawrie and Angus D. MacColl, the 29-year-old Johnstone has been touring the world with the 4 Scots (Highlanders) over the last eight years and now lives in nearby Taynuilt. Irvine has played with the Grade 1 Peoples Ford Boghall & Bathgate Caledonia for the last 16 years. Rosie is an eight-year veteran of the Grade 1 Glasgow Police Pipe Band.

Oban was not competitively active in 2018. The band reformed in 2011, and won Grade 3A at the World Championships that year. Oban reports that it has retained existing players and signed new ones, looking forward to a strong new approach in 2019, with practices starting at the end of September. Prospective new members are encouraged to contact Johnstone by email or Irvine, also by email.

Oban’s moves come on the heels of Dundee-based MacKenzie Caledonian announcing that it is searching for a new pipe-major, after Neil Nicholson stepped down.

+ MacKenzie latest in P-M recruitment mode after Nicholson steps down

Last week, the Grade 2 Royal Burgh of Stirling revealed that it had successfully recruited Gary Nimmo as its new pipe-major. Originally from Falkirk, Nimmo had been in the Ullapool and Wester Ross areas for several years, but has moved back to central Scotland. For the last few years, he had managed the Grade 1 Vancouver-based Dowco Triumph Street’s contingent of UK-based pipers and drummers, organizing regular practices in Scotland.

Royal Burgh of Stirling, which also has a band in Grade 4A, had an active 2018. Its best result in Grade 2 was a fourth at the European Championships in July. The group narrowly missed qualifying for the Grade 2 Final at the World’s, ending up seventh in its qualifying heat.

Dowco Triumph Street has not yet commented on how it plans to continue with its strong group of players from Scotland and Northern Ireland, including Lead-Drummer Gary Corkin, a resident of Belfast, who took the role in 2016.

The Grade 1 Lomond & Clyde also revealed that it will be on the hunt for a new pipe-major, after David Wilton resigned. Wilton had led the band since 2015, guiding it to Grade 1 status. The Glasgow-based band in August announced that it would begin to hold practices in Perth, after Wilton moved to Dundee to take a prominent piping teaching job with Dundee City Schools.