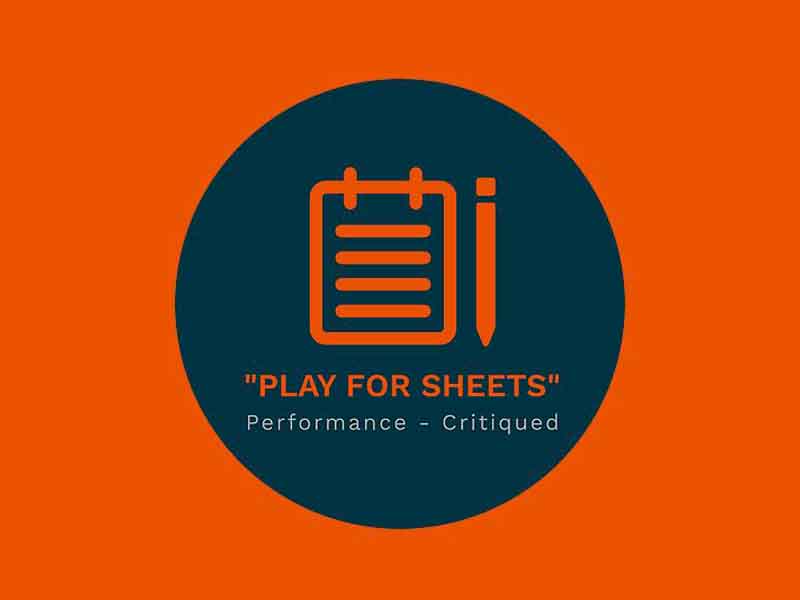 A visit with a physiotherapist gave Cameron Drummond the spark of an idea to create PlayForSheets.com, a new website that enables any piper or drummer from anywhere in the world to submit a recorded performance for personalized feedback.

Drummond, who lives in Edinburgh, bounced his idea off of fellow top-tier piper Glenn Brown of Glasgow. Brown loved the concept, and soon they engaged famous snare drummers Blair Brown and Steven McWhirter to come on board. The four of them launched the entrepreneurial site on June 4th.

“I’ve been seeing the way things are going with online comps and uploading videos, and the piping and drumming world has never been smaller, in terms of online engagement, at least,” Drummond said. “I was visiting a physio for some lower back pain. I found the whole process so slick. I went in, told my sob story, and was briefly assessed with some stretches and movements. Then, as easy as dragging a few exercises from a database onto a page, I was on my way. Almost like receiving a prescription from a doctor or having an exercise program constructed at the gym. The infrastructure for that sort of operation was beyond me at the time, but there was a seed of an idea.”

“There are a load of players out there who take lessons, have taken lessons, want lessons, but there’s no one around,” Drummond said. “Players who don’t want lessons but want to know if they still have ‘it’ and where they stand, players who don’t know if they should take lessons, teachers who want their pupils to open their horizons and maybe even need some back up in terms of teaching and learning points. I hope the website speaks for itself – I’ve kept it as simple as possible, but I’m keen to get across that it’s the best and easiest way to get an objective listen from an expert.”

Drummond stresses that PlayForSheets.com is not an online competition or teaching site, but purely a one-time feedback system to obtain personalized recommendations from active pipers and drummers who consider things from a competitor’s perspective.

“We’re not looking to teach people how to play the pipes and drums,” Drummond added. “We all offer that individually, but this is a platform where you can engage some of the top players in the world and get their expert opinion on the performance of your choice. The idea is that our panel are all current top players and not strictly registered judges. We want to have the current top guys giving their opinions on playing and maybe some tips on how to go about performance in competition.”

The group has considered the qualities of scoresheets from around the world and pulled together the attributes that they feel are most useful.

A “Competition Style Critique” is £7 and described as a “single, live-listen and critique,” written live, in real-time, along with a submitted recording. An “Advanced Constructive Critique” is £10, for a more in-depth analysis of the performance; and “Face To Face – Online Critique” is £20 and comprises a 30-minute critique of the performance “including listening through together and talking over all of the major factors positively and negatively impacting on the performance.” For an extra £2, participants can choose who they want to assess their performance.

All four are some of the world’s most successful players. Among their prizes, Drummond has won the Silver Chanter and the Silver Star MSR at the Northern Meeting; Glenn Brown the Highland Society of London Gold Medal at the Northern Meeting, the Bratach Gorm at London and the Piobaireachd at the Glenfiddich Championships; Blair Brown numerous prizes in the World Solo Drumming Championships; and McWhirter, the ten-time World Solo Drumming Champion and lead-drummer of the reigning World Champions Inveraray & District.

Drummond was clear that PlayForSheets.com is not about judges giving feedback to pupils or anyone they might be judging soon.

“We’re not trying to recruit judges to do this,” he said. “Although we all have some judging experience, I want to avoid the judges teaching pupil scenario and not promote the idea you can get a judge’s critique in advance of a contest they may be judging. The basic critique is a live listen ‘competition style.’ So the critic sits with a crit sheet in front of them, hits play and writes through the performance with a little time for summing up at the end – exactly as it would be in competition format.”

The group is working on a pipe band assessment option for when bands start to practice again in-person.

Drummond said that discounts will be available for pipers and drummers signing up for multiple critiques, and “it could be a monthly thing for some and something to work towards as part of their practice routine. It could be a one-off thing, two weeks out from a big competition to complement the feedback they already get from their teacher.”

Foote said that the initiative is “primarily made up individuals who are adjudicators in North America. This service is about getting as many opinions from various qualified individuals.”

He added that it “differs in that it offers a written sheet and also a short video tutorial – more towards mentoring than judging. The same kind of service is being used by other musical idioms and has been for quite some time. It’s not a new idea, just new to us.”

Other entrepreneurial initiatives have sprung up during the COVID-19 lockdown. Grade 1 St. Laurence O’Toole Pipe-Major Alen Tully recently launched a medley consulting service, and many pipe band associations and piping and drumming schools are innovating with new online competition and learning formats.

See also
Results
Dick crosses bridge for double wins in Fife
Results
Boghall takes overall points trophy, Shotts has overall best prizes at North Berwick as countdown to World’s begins
Read all in News
Get the Newsletter!
Sign up to receive our most popular stories in your inbox every month.
Thank you, you have successfully subscribed for our newsletter, please check your email
We use cookies on our website to give you the most relevant experience by remembering your preferences and repeat visits. By clicking “Accept All”, you consent to the use of ALL the cookies. However, you may visit "Cookie Policy" to provide a controlled consent.
Cookie PolicyReject AllAccept All
Manage consent