From the archives: Robert Mathieson’s ‘The Big Birl’ of 1997 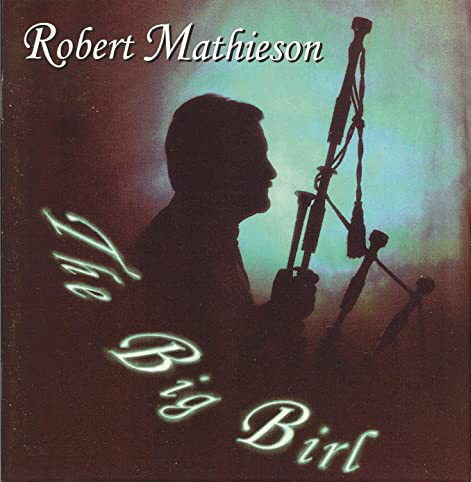 In the unlikely event that you have not heard of Robert Mathieson, a quick browse through the list of accompanying musicians – 15 in all – on his latest recording, The Big Birl, will tell you that this CD must be something special. And you will not be disappointed.

This is a truly professional affair, with excellent technical production, fine music and superb musicianship. It may not appeal to “purists” or “finger gymnasts,” but I am convinced that this type of musical collaboration between the Highland bagpipe and other instruments is at the forefront of its ever-widening international appeal.

The notes to the CD are detailed and informative, with some amusing explanations of tune names. There are no cover versions of “other people” tunes here. Twenty-eight pieces are written by Mathieson himself.

“I am convinced that this type of musical collaboration between the Highland bagpipe and other instruments is at the forefront of its ever-widening international appeal.”

The opening track played on smallpipes commences with the highly originally named slow air, “Song for Smallpipe.” This is followed by two reels played to great effect at a tempo much slower than we are used to hearing. The arrangement and accompanying instrumentation are clever and subtle, preparing the listener well for what is to follow.

If I have any criticism of The Big Birl it is the second track. Mathieson says jokingly that a solo “blues piano” is a must. It isn’t and, although played well, it’s well out of place.

My favourite track, however, is the “Minuette” that comprises the fourth track. I think my family and neighbours are fed up with me holding this track in repeat mode on my CD player. This is pure “Mathieson music,” and a brilliant inclusion. The pipe and string quartet work wonderfully together, and the orchestration is as near perfection as one can get.

Most of the other tracks are what you would expect from a Mathieson CD: great pipe, good arrangements, nothing way out . . . well, that is, apart from tracks eight and 11.

Preparation for listening to “Calypso” is all-important. You will need Bermuda shorts, sunglasses, tanning lamp, and then, “Hey! Let’s calypso!” I read the sleeve notes on the plane coming home from the World’s this year, and thought, Hmmmm – I don’t think so. But I was wrong. This track is clever, fun, enjoyable and is exactly what attracts me to this type of recording.

Track 11 is another bit of fun: haggis and heather hits heavy metal. Readers of a certain age should just lay back, pour a glass, close their eyes, and think “Robert Mathieson Live in L.A.” or “Humble Pipe Rocking at the Filmore.” Cool stuff.

The closing selection is “The Bells of Dunblane,” and is a moving and beautiful piece of music. It is indeed a fitting tribute to the children who died in the 1996 tragedy.

The Big Birl is a great CD. Your collection will be incomplete without it.

Roderick “R.S.” MacDonald is a well-known and adventurous composer of pipe tunes, as well as a piper of the first order. He lives in London, England, and plans to release his first collection of music in 1998. (Update for 2022: R.S. MacDonald has lived in Australia for the last two decades and is recognized as one of the greatest composers in piping history.)

CD copies of The Big Birl can be found at retailers and via Spotify and other digital sources.