Is the World’s killing the pipe band world? Part 1

In 1966, the Grade 1 Clan MacFarlane Pipe Band of St. Catharines, Ontario, made a trip to Scotland to compete in the World Championships. Setting out from Toronto International Airport, the group boarded a Douglas Turbo-Prop aircraft, a twin-engine propeller-driven plane that carried them, first, to Gander, Newfoundland, for refueling, and then on a 10-hour flight over the turbulent North Atlantic to Prestwick, Scotland. On arrival, the band boarded a bus, which arrived some six hours later at their ultimate destination, Kingussie, where the band would stay as it anxiously awaited the day of the contest at Bught Park, Inverness.

It was a complex and expensive effort, finally made feasible by the advent of commercial trans-Atlantic air travel. The novel idea of travelling 3,000 miles to compete at the World Pipe Band Championships, to test Clan MacFarlane’s talents against Scotland’s best, was strong enough to make such a complex and lengthy journey. Planning and saving took more than three years.

Nineteen-sixty-six was something of a breakthrough year for “overseas” bands competing at the World Championships. Clan MacFarlane were joined at the contest that year by Grade 1 rivals, City of Toronto and Worcester Kiltie of Massachusetts.

While Clan MacFarlane enjoyed its stay in Scotland, the competition didn’t go so well. The band finished eleventh in Grade 1, handily thumped by all but a few UK-based bands, not to mention City of Toronto, which made the list by finishing fifth, buoyed by a stellar second-place in piping. City of Toronto was topped in that category only by Scottish legends Muirhead & Sons, a band that was in the midst of its historic five straight World’s titles. But “The Clan” had gained a taste of the big-time; it had seen and heard the standard that would be needed to succeed, and began to understand the complexity of Scottish pipe band politics.

While the band had its sporrans handed to it on a platter, figuratively speaking, it was not humiliated. To the contrary, the band was energized. They returned to Ontario ready to practice harder, learn from the trip, and commit to compete again at the World’s as soon as possible. With one sip of the World’s elixir, it was hooked. 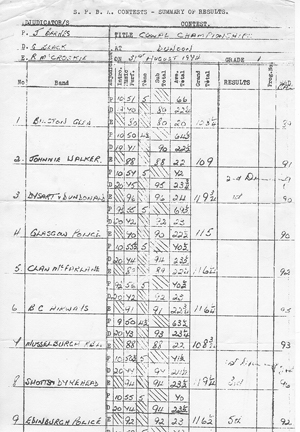 And their compulsion to compete at the World’s was passed along to others. As the word spread of the band’s trip, additional non-Scottish pipe bands were turned on to the intoxicating idea of travelling to Scottish Pipe Band Association championships to match talents with the likes of Shotts & Dykehead, Red Hackle, Muirheads and, of course, the illustrious city police bands of Glasgow and Edinburgh.

There can be no doubt that the World Pipe Band Championships, as we recognize it today, is the biggest and most important event on the competition calendar. For those addicted to pipe band competition, there is no better single-day hit. The World’s produces an adrenaline and endorphin rush producing a high to last the year.

The World Pipe Band Championships are an undeniably successful event that will inevitably continue to get better and better as its owners, the RSPBA and the Glasgow City Council, look for ways to extend its reach and popularity. Every year the organizers flaunt the huge number of bands as a spectacle not to be missed — and rightly so. For many events, bigger is better, especially when the artists themselves even pay to have the honour to perform at it.

But while the World’s is the focal point for the pipe band world, does it come at a cost for the very well-being of the pipe band world itself? It might be fairly said that the trend of competing at the World’s has both a negative and positive impact on piping and drumming as art-forms. The desire to succeed at the one-day competition perhaps comes at a cost to the promotion and development of pipe band music.

And what impact is the competition having on pipe band regions and associations around the world? Do the benefits of the contest outweigh the possible damages inflicted on the health of various pipe band grades?

Has the very success of the World Pipe Band Championship halted the forward momentum of once-thriving pipe band regions and associations?

While acknowledging the unparalleled success of the World’s – and giving full credit to the spectacular competition – this article will attempt to weigh both the pros and the cons of the competition when it is considered on a broader level.