The consensus seems to be these days that John MacDonald of Inverness was the most important piper of the last hundred years. A pupil of the MacPhersons of Laggan, MacDonald went on to shape the careers dozens of pupils, and his most prominent students included the great Robert Brown, Robert Nicol, and Donald MacLeod. These people subsequently went on to teach hundreds of students between them.

While William Ross and G.S. McLennan were composers and competitors of great note, John MacDonald’s teachings have turned out to dictate how the majority of piobaireachd is interpreted and played today. MacDonald’s impact on piping cannot be underestimated.

After much searching, we finally found MacDonald’s final resting place in Forres, Scotland, at the verdant and tranquil Cluny Hill Cemetery, near Nairn, Scotland. At one time the view from MacDonald’s grave would have looked out on the town, but, with the growth of greenery over the years, one wag commented, “We can’t see the Forres for the trees.”

Not only did we find MacDonald’s grave during our travels, we separately sourced his death certificate, of which we include a scan here for the first time ever in a piping periodical.

As with many things historic, we asked Dr. William Donaldson (a pupil himself of Robert Nicol, and author of the seminal historical work The Highland Pipe and Scottish Society) for his insights on John MacDonald. Here’s what he supplied: 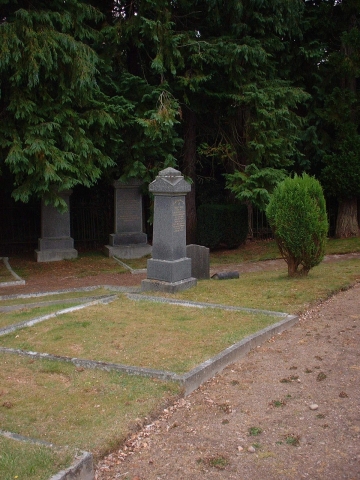 John McDonald was born at 8:00 a.m. on 26 July 1865 in Glentruim, Parish of Laggan. Many sources wrongly give his date of birth as 1866, including the sleeve notes to the current Masters of Piobaireachd CD series.

He died at 1:00 a.m. on 6 June 1953 at his home at 3 Perceval Road, Inverness, and was described on the death certificate as “Commercial Traveller (retired) and Teacher of Pipe Music, Widower of 1st Christina Todd and 2nd Helen Gibb, which is also interesting in view of the fact that he has often been described in print as unmarried. Christina Todd had died in 1929 after a long illness and Helen Gibb had died in 1932.

He was buried alongside Helen Gibb at Cluny Hill Cemetery, Forres, on 8th June with his brother Andrew and leading pipers, including Bob Brown, Donald MacLeod and Willie Ross at the graveside where Robert Bell Nicol played.