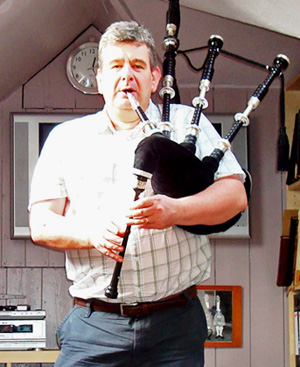 After 15 months in the role, Colin MacLellan has submitted his resignation to the College of Piping in Glasgow as Director of Piping. MacLellan cited other work and volunteer commitments as the reasons, and his brief tenure will conclude at the end of the month.

MacLellan last week was elected Chair of the Solo Piping Judges Association. He runs the successful reed making business, PipeReeds.com from his home in Edinburgh.

The Director of Piping position is a part-time role, and MacLellan had made the 40-mile commute to oversee the piping teaching program about once a week, as well as working from home and attending frequent weekend events as the face of the 70-year-old institution.

The organization has already commenced its search for a replacement director. It is believed that Chris Armstrong, Gold Medallist and pipe-major of the Grade 1 ScottishPower Pipe Band, is a front-runner for the job. Armstrong reportedly narrowly missed out on the role in August 2016.

The piping program at the College reportedly will be managed in the interim by Stuart Letford, who holds a contract position with the organization as editor of its Piping Times magazine and Butter Fingers blog.

The College of Piping was allegedly threatened with legal action by Robert Wallace over satirical comments made in the gossip blog regarding solo judging. The college has published at least two apologies to Wallace, reportedly to settle the matter.

The College of Piping was co-founded in 1944 by Seumas MacNeill and Thomas Pearston.