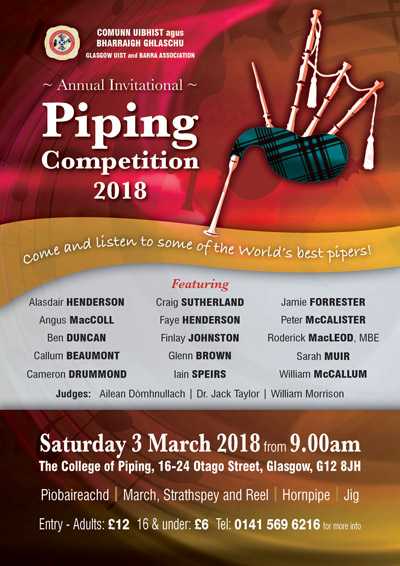 The list of invitees is drawn up from results from the previous year by pipers graded A or better in the major UK events. Competing for the first time are Sarah Muir of Glasgow and Peter McCalister of Dunblane, Scotland. Along with younger players like Callum Beaumont, Linlithgow, Scotland; Alasdair Henderson, Dunoon, Scotland; Faye Henderson, Edinburgh; and Craig Sutherland, Perth, Scotland, the gradual changing of the guard with the UK’s elite solo pipers continues.

“As usual, we review the major competition results in the previous year and invite the best performers to compete, so it is as close to a meritocracy as we can get for an invitational competition,” said organizer John-Angus Smith. “We are delighted to welcome Sarah Muir and Ben Duncan for the first time, both of whom had outstanding seasons in 2017, and it is encouraging to see so many of the next generation of top pipers compete against some of the great names of today.”

The competition will also be the first significant event judged by recently appointed SPJA member Allan MacDonald (Ailean Dòmhnullach), who joins Willie Morrison and Jack Taylor on the bench for both the piobaireachd and light music events. Smith remarked that both MacDonald and Morrison are Gaelic speakers, thus reflecting the ethos of the Glasgow Uist & Barra Association to promote the language and culture.

Roddy MacLeod and Willie McCallum are returning to the event after pulling out from the 2017 competition, citing “unforeseen circumstances.”

The Uist & Barra is generally considered the kickoff for the new senior solo piping season in Scotland.