As we wait out the long winter months in the northern hemisphere, pipes|drums Magazine is pleased to bring you the second in our series of videos from the annual Pipes + Drums Recital, sponsored by pipes|drums Magazine, at the Piping Live! Glasgow International Piping Festival.

This year’s event on August 9th drew probably the largest crowd ever for a Street Café event at Piping Live!, with enthusiastic listeners spilling out from the marquee at least 20 deep, almost onto the road. 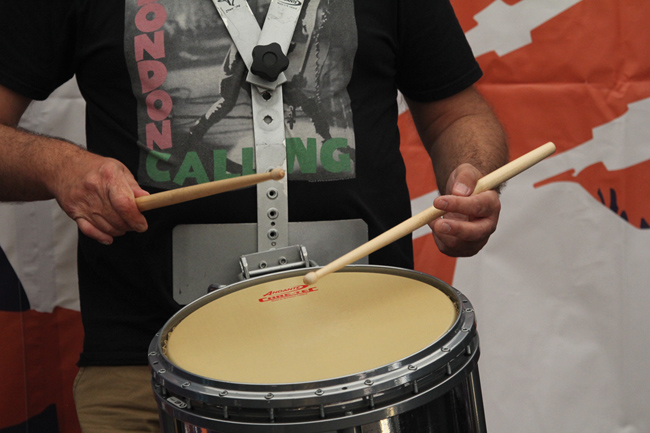 Gordon Brown is a superstar of pipe band drumming. The leading-drummer of Boghall & Bathgate since 1992, Brown was the winner of the World Solo Drumming Championship in 1994 and 2002, and featured routinely in the top-six oat the event until he retired from solo competing. He has led his Boghall & Bathgate drum section to multiple titles, including two RSPBA Champion of Champions (2007 and 2010), a World Band Drumming title (2001). He teaches and judges all around the world.

Calum Watson, who filled in on short notice for Pipe-Major Ross Harvey, who had to cancel due to work commitments in Edinburgh, is from Lasswade, Scotland, and a piper on the rapid ascent, featuring in solo competition prize-lists in Scotland over the last few years.

With proceeds from pipes|drums subscriptions and advertising revenues, we are able to fund events such as the Pipes+Drums Recital, where performers are compensated fairly for their work. Be sure to check out the pipes|drums Magazine YouTube channel, now featuring almost 500 original piping and drumming videos.

We hope that you enjoy these videos from last year’s pipes|drums Magazine Pipes+Drums Recital, and please stay tuned for more over the next few months.

(Keep turning to the next page for each of the five videos.)