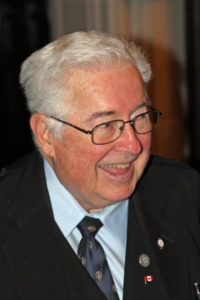 Reay Mackay, one of Canada’s greatest leaders and ambassadors of the pipes, died on March 14, 2017, after prolonged health issues.

Beloved by all who knew him, Reay Mackay possessed a charm and wit and congenial personality that made him a magnetic personality in his native Ontario and around the world as a judge and teacher.

He was the legendary John Wilson of Edinburgh and Toronto’s best-known pupil and studied with the great master more than anyone, beginning virtually from the point that Wilson landed in Toronto in 1948 until his death in 1979.

His work with Wilson was preceded by instruction from Murdo MacLeod, a pupil of John MacDougall Gillies and, before MacLeod, Mackay was taught by his father. Mackay’s work with MacLeod was almost entirely in light music. As an 11-year-old Mackay heard Wilson play and his father quickly arranged for lessons. He would be one of Wilson’s prized pupils after decades of close, weekly instruction.

Mackay’s competition career as a solo piper was relatively brief, retiring in 1969 at age 32, but not before sweeping up all of the major prizes in Canada and being a consistently dominant presence on the Open solo boards. He won the aggregate trophy in Open Solo Piping at the North American Championships at the Glengarry Highland Games in Maxville, Ontario, numerous times.

With pipe bands Reay Mackay was most notably associated with the 48th Highlanders of Canada, of which he was pipe-major for more than a decade, taking the band to Grade 1 status and keeping it there until he retired from the militia. He then became pipe-major of the then Grade 2 Toronto Police Pipe Band, which he led for the better part of the 1980s before settling into a piping life of teaching and judging. Perhaps his best known pupils were Michael Grey and Steven Tripp, with whom he had special bonds.

His ability as an accordionist contributed to his musical leadership of pipe bands, understanding how to apply keys, harmony and counter-melodies to competition medleys.

As an adjudicator of bands and soloists he was known for his fairness and constructive criticism. In fact, many competitors thought he was congenial to a fault, often seeming to like too much about performances that it could be difficult to discern from his scoresheets exactly what was wrong.

Reay Mackay was active in piping to the very end of his life with teaching and judging, as he was able. True to form, in his final weeks he insisted on attending the Final of the Toronto Knockout Competition.

He compiled a collection of pipe tunes in 2016, yet to be published, which comprise many of his own compositions, including his much-played hornpipe, “Colin Mackay.”

The family will have a private ceremony on March 19th, and is planning a celebration of his life in the next few weeks.

Reay Mackay was one of Canada’s greatest exponents of piping, a warm and cheerful ambassador for all that is good about the instrument and its players. He is survived by his daughters Sheila and Glenna, who herself followed in her father’s footsteps as a piper, and his wife Joan, and several grandchildren on whom he doted. We extend our sympathies to Reay Mackay’s family and many friends at this sad time.

A full tribute to Reay Mackay will follow soon.