Review: ‘Levels of detail that sounded more real than imagined’ 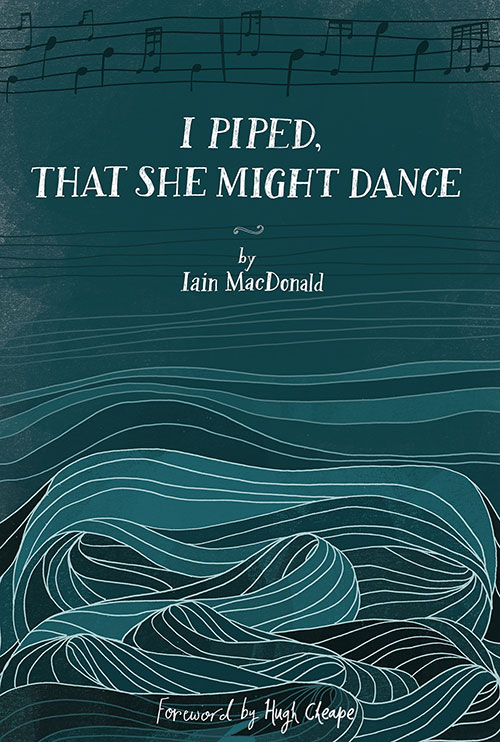 I Piped, That She Might Dance
By Iain MacDonald
Published by Blackwater Press
Paperback, $24.99 (£16) + shipping
Available from the publisher, the National Piping Centre, or directly from the author

Angus MacKay was born to a well-known piper of simple means. The Highland Society of London awarded MacKay a prize for notating piobaireachd using staff notation when he was only 13. He won the Prize Pipe when he was 21. At 25, he published the most influential piobaireachd collection to date, with 61 tunes. A Collection of Ancient Piobaireachd shaped the way we play today and increased music literacy among pipers. MacKay stands as a key link between oral and written tradition. His manuscripts include three times the number of tunes he earlier published. He had a hand in creating the 2/4 competition march genre. When MacKay was 29, Queen Victoria appointed him as the first Piper to the Sovereign, at the height of the bagpipe’s cosmopolitan popularity. It was the most public and prestigious post a piper has ever enjoyed.

Angus MacKay’s star-is-born story has the dramatic impact and climactic arc that could make you think: this should be a novel! Iain MacDonald has done just that. In I Piped, that She Might Dance, MacDonald gives voice to a mentally ill MacKay, who is writing his memoir while languishing in the notorious Bedlam Royal Hospital.

This is MacDonald’s stroke of genius: he establishes MacKay as an unreliable narrator. In his state, MacKay can’t be expected to get every fact right, so we don’t quibble over details or interpretations.

Rather than treating MacKay’s illness as a postscript, MacDonald begins by drawing our attention straight to his condition, painting it in vivid detail. This is MacDonald’s stroke of genius: he establishes MacKay as an unreliable narrator. In his state, MacKay can’t be expected to get every fact right, so we don’t quibble over details or interpretations. That’s not to say MacDonald isn’t well-researched. He incorporates more fact than fiction here, drawing upon academic papers, hospital records, Queen Victoria’s diaries, known realities of Victorian life, along with his own extensive knowledge and experience within the piping world. MacDonald has fleshed out the narrative of arguably the most interesting man in piping history, and certainly the most influential piper to date.

Aside from the intro within the asylum, the story unfolds linearly. Born on the small isle of Raasay, MacKay spent his early years in Taigh a’ Phìobaire, or The Piper’s House, a 50-foot-long lodging with cattle on one side and a family of 10 on the other. An open peat fire burned in the middle, with merely a hole in the thatched roof for the smoke. While this was hardly a privileged beginning, he was a son of the distinguished piper, John MacKay. Angus MacKay’s early lessons with his father are reminiscent of William MacLean’s recorded memories of Calum Piobaire’s teaching at Badenoch. It was a time when visiting pipers had to walk many miles and stay overnight for tuition, rather than just firing up the laptop.

“It is a great point of pride to know I descend from such a line,” MacKay says in the book, “but anyone who lifts a pipe and plays a good tune knows that lineage is but a thread or two to the past, and a few threads do not make a sturdy garment. My father and I were great pipers firstly because of the luck of our situation, and then because we worked at it our entire lives.”

The dialogue, ostensibly from the pen of MacKay, often has this lyrical rhythm, not unlike Gaelic proverbs.

The dialogue, ostensibly from the pen of MacKay, often has this lyrical rhythm, not unlike Gaelic proverbs. While in Bedlam, the real Angus MacKay kept a diary recorded in Gaelic. MacDonald has duly interspersed Gaelic dialogue throughout, with exclamations and terms of endearment in MacKay’s native tongue. An appendix includes the Gaelic words and phrases included in the novel.

Certain details that seemed to be contrived or clumsy, such as the princess saying MacKay “was a poor man making funny music,” turned out to be verbatim from recorded sources. That particular quote comes from Queen Victoria’s diaries, with only the Princess’ nickname subtly censored.

Iain MacDonald draws attention to details easy to overlook, such as the family’s lengthy journey from Raasay to Crieff for John MacKay’s new position at Drummond Castle. While this typical biographical point is easy to brush over, MacDonald highlights the immensity of their relocation. It was an arduous, couple-hundred-mile trek over unpaved roads, on foot, with their possessions loaded on ponies. This is in stark contrast to MacKay and his wife Mary’s later relocation to London in a carriage sent by the queen.

Much of the book recounts MacKay’s time in London and at Balmoral Castle, in service to and in familiar acquaintance with Queen Victoria. This close association could be exaggerated, as evidenced by his later condition and delusions of the Queen. But it is at least believable, not simply because he is assumed to be of sound mind during that stage of his life. The Queen had a long and close friendship with her Scottish gillie and personal attendant, John Brown. After his death, she had Brown memorialized in statue-form at Balmoral. According to I Piped, it was Angus MacKay who first led the Queen’s pony for years at Balmoral and served the unspoken role of companion. She later brought in John Brown to take over the pony detail and other personal duties. In these pages, the insecurities and paranoia brought on by this role change, compounded with trauma over the death of his father and brother, seem to trigger MacKay’s worsening mental state.

I Piped is not esoteric and is easy to understand without a piping background.

Alistair Campsie’s 1980 publication, The MacCrimmon Legend and the Madness of Angus MacKay, used MacKay’s struggles with mental illness to discount his legacy along with going full Snopes.com on MacCrimmon lore. Campsie sees Angus MacKay, via his Collection of Ancient Piobaireachd, as the source of MacCrimmon’s lofty place in piping history.

MacKay (via MacDonald) sets the record straight in his memoir here, pointing the finger of blame squarely at James Logan. MacKay alleges he simply delivered his hand-written tunes to Logan, who added the writing and “fakelore.” In his telling, MacKay saw none of the engravings or proofs before they went to publication, hence the myriad note errors and factual discrepancies.

In the 19th-century Kickstarter format of subscription publications, the success of a publication required pandering to wealthy, landed subscribers. Logan, with his publishing experience and many social connections, was picked to guarantee the success of the collection. MacKay claims Logan selected compositions based on the writing, not the other way around. MacKay’s allegation seems plausible, considering the inclusion of slight tunes with relevant titles as opposed to great, classic pieces that may not have fit in with Logan’s written narrative. MacKay never published another piobaireachd collection, despite his extensive manuscript being largely finished by 1840.

I Piped is not esoteric and is easy to understand without a piping background. Yet many choice details remain for pipers and MacDonald references and interweaves tune names throughout the text. While returning home from his first visit to Bethlem hospital, MacKay sits in the back of a cab, whistling “The Unjust Incarceration.” Rather than the piobaireachd, I imagine him humming his inventive and manic 9/8 jig arrangement of “The Unjust Incarceration,” as notated in his “Seaforth” manuscript. In this manuscript, compiled by MacKay at Bethlem, the “Unjust” jig sits right next to another 9/8 jig he composed, “Triall Bhethlehem.” Truth is stranger than fiction.

But given MacKay’s later condition, it seems plausible that a bipolar disorder could have contributed to his noted vices. His intake form at Bedlam gave the “cause of insanity” as ‘Disappointment and Drink, Overstudy of Music.’ He was later described as the ‘most violent patient in England.’

MacKay may have had bipolar disorder, exacerbated by late-stage syphilis and alcoholism. Many musicians and stars are prone to impulsive excesses and risky, thrill-seeking behavior. But given MacKay’s later condition, it seems plausible that a bipolar disorder could have contributed to his noted vices. His intake form at Bedlam gave the “cause of insanity” as “Disappointment and Drink, Overstudy of Music.” He was later described as the “most violent patient in England.”

The central conceit of this novel, that MacKay wrote his memoir while in Bedlam as he drifted further into confusion, means the writing understandably gets somewhat disjointed by the end as MacKay’s mind deteriorates. It feels as though the fiction has gone too far at this point. We have imagined hospital records filling in the narrative gaps and informing us of MacKay’s delusions: conspiracy theories, visions of god, royal scandals. It’s crass, ribald, and darkly comic. However, the genuine shock lies in its veracity: MacDonald has not fabricated the medical records and they serve as the basis for the latter part of the text. When the book is at its most absurd and obscene, there is perhaps the largest historical record to back it up.

I Piped, That She Might Dance lends itself to further reading and discovery. One of the great joys while reading this novel was researching where the recorded history ends and the conjecture and fictionalization begins. MacDonald has made this easier by referencing numerous sources in an appendix.

MacKay writes of hearing the retelling of local tales “with levels of detail that . . . sounded more real than imagined.” I can’t think of a better way to describe the experience of reading MacDonald’s masterwork. I’m not sure if the screen rights are still available, but this should be a movie!

Nick Hudson is a native of Pittsburgh and learned much of his piping from the late greats Alasdair Gillies and James McIntosh. For the last several years, he has been a full-time piping instructor at St. Thomas Episcopal School in Houston, where he plays a significant role in the school’s renowned teaching program. Among Hudson’s solo successes are the B-Grade Strathspey & Reel at the 2016 Argyllshire Gathering, the B-Grade Strathspey & Reel at the 2016 Northern Meeting, and the 2015 Piobaireachd Society (Canada) Gold Medal for Piobaireachd at the Glengarry Highland Games at Maxville, Ontario. He’s a member of the Grade 1 St. Thomas Alumni, and has been a piper with the Grade 1 Toronto Police.

Historical novel about Angus MacKay rolls off the press
September 17, 2021

Second exclusive excerpt from ‘I Piped, That She Might Dance, the Lost Journal of Angus MacKay, Piper to Queen Victoria’
April 9, 2020