At a time when some associations and pipe bands are concerned about their very ability to survive financially, the Royal Scottish Pipe Band Association – a registered charity – is proposing monetary compensation for members of its 18-member board of directors.

The organization wants to implement a new “competition allowance” for directors attending major championships and smaller competitions. The allowance would be in addition to the RSPBA’s membership covering directors’ travel and accommodation expenses.

While the association couches the proposal by saying that no director shall be a “paid employee,” it proposes getting around the “paid employee” issue by implementing the “competition allowance.” If approved, the RSPBA’s finance committee would set the amount of the allowance.

The 18 members of the RSPBA’s board of directors are representatives from each of the association’s branches, elected by each branch’s member bands. Branches with more bands have commensurately more board members. Three positions are currently vacant, the latest after Douglas Martin of the three-member Lothian & Borders branch resigned. 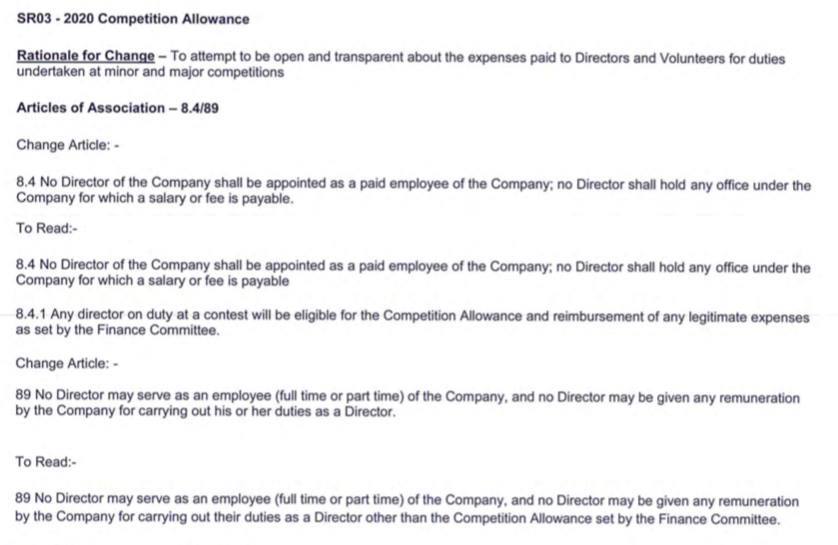 The compensation proposal not only comes in the middle of the coronavirus pandemic but in the wake of the association’s contentious £1.2-million renovation of its Victorian-era headquarters at 45 Washington Street, which houses offices for a handful of paid employees.

The RSPBA shuttered the renovated headquarters for most of the last five months due to the COVID-19 lockdown in Scotland.

With no competition revenue and far fewer dues paid by member bands, the RSPBA has received loans and grants to help maintain solvency. Should cancellation of in-person competitions continue into 2021, the purpose of piping and drumming associations could well be in more doubt, and financial constraints would be almost certainly more severe.

Directors, who are also “trustees” of the association, are prohibited from earning a wage, salary or remuneration, according to the RSPBA’s Articles of Association and Scottish charity law. Still, they can have their expenses covered and payment for “services.”

Directors, who are also “trustees” of the association, are prohibited from earning a wage, salary or remuneration, according to the RSPBA’s Articles of Association and Scottish charity law. Still, they can have their expenses covered and payment for “services.”

According to the RSPBA’s 2019 financial report, expenses for the organization’s directors for the European Championships at Inverness, Scotland, came to £20,589, or about USD$27,500.

The Scottish Charity Regulator (OCR) lays out guidelines and rules for the remuneration of trustees. The OCR, which responded to a concern regarding the RSPBA’s transparency, states, “A charity must not pay charity trustees, and people who are connected to them unless the charity can satisfy the conditions set out in the 2005 Act.” Among those conditions is payment for services rendered.

The proposal was initially on the organization’s list of items to consider at its annual general meeting, which due to the lockdown, was held on June 27th by online conference. The RSPBA’s board of directors themselves could conceivably vote on the special resolution.

Member bands’ secretaries were permitted to submit written questions in advance, but there was no interactive video communication with members during the event.

The RSPBA is holding a video conference call with Grade 1 pipe-majors and lead-drummers on August 15th, coinciding with the date of the cancelled World Pipe Band Championships at Glasgow Green.

The topic of the call is the format of the Medley event at the World’s, and whether bands should move to a “concert” formation.

pipes|drums’ comprehensive survey of the globe’s Grade 1 and Grade 2 pipe-majors showed that there was little desire to move to concert formation. 68% of bands from the UK want to see the format stay the same for both medleys and MSR. Worldwide, 54% of top-grade bands want medleys in concert formation, while 46% prefer the format to remain the same.

The RSPBA has claimed that concert format would reduce the risk of exposure to and spread of COVID-19, though there is no known credible scientific evidence that pipe bands are safer when playing in concert format.

In a statement, the RSPBA described the conference call with its members as a “ground-breaking event.”

It is not known whether the current five-to-seven-minute requirement for Grade 1 medleys is also on the agenda.

Going back more than 15 years, pipes|drums has expressed editorial opinion in favour of trying concert formation, extended medley time, and the World’s Grade 1 final competition to move to a formal ticketed concert or arena.

Breton bagad competitions use concert formation in highly popular freeform 15-minute performances, with their national championship held in a sporting arena before an paying audience of more than 10,000. The Chicago Highland Games has used concert formation for its Grade 2 and Grade 3 medley events for several years with apparent popularity. The RSPBA itself has tried concert formation, but the experiment was rejected quickly after bands and judges expressed dissatisfaction.

At publication time, RSPBA Chairman John Hughes had not responded to a request for comment.

Squaring the circle: we survey the world’s top bands on concert formation
July 17, 2020

RSPBA asks bands to pay to use renovated headquarters
March 22, 2020