Editor’s note: The worldwide COVID-19 crisis has inundated everyone with persistently unwelcome news. pipes|drums is as worn down by this as everyone else. We look for and even create more positive articles. But we feel that it is our duty to inform pipers and drummers about our own small world, which is of huge importance to pipers and drummers whose hobby is an avocation, if not crucial to their livelihood. This is an important story, and for the well being of piping and drumming, we hope that the situation can be resolved.

In November 2019, Royal Scottish Pipe Band Association Chief Executive Ian Embelton acknowledged that the organization expected payments from the five 2020 championship events to ensure that a debt of more than £200,000 for cost overruns from its £1-million-plus headquarters renovation could be covered.

As reported in the association’s financial statement, there was £8,604 in cash in the bank at the end of 2019, seemingly contravening the RSPBA’s policy of maintaining a balance of at least £261,000 – the amount needed to run the organization and its competitions in the event of a disaster.

The unforeseen situation that the RSPBA hoped would not happen appears to be here now as the scope and implications of the COVID-19 pandemic develop.

The RSPBA acknowledged in a statement that “there is a likelihood that [the] first three championships may move date. However, we must stress that no decisions have yet been taken on any new dates.”

The day after that statement, the British Championship, the first of the five major contests, scheduled for May 23rd in Paisley, Scotland, was cancelled.

The more the crisis continues, the more likely it is that the entire RSPBA season could be cancelled.

The association apparently went to a Plan B when it decided to forego its reserve cash policy and gamble that future payments from championships would come in. Embelton was questioned about the decisions at the annual general meeting of the association’s Northern Ireland branch, but the discussion devolved into him calling skeptical members “morons,” apparently for having the temerity to raise basic concerns.

pipes|drums has again reached out to Embelton, asking him to discuss whether there is now a Plan C, in case payments from championships are delayed and the season is write-off.

At publication time, there had been no reply.

The worst-case scenario would be the entire UK competition season being cancelled, which would make it necessary to refund entry fees to bands.

Despite the gathering being in all likelihood fewer than 100 people, the RSPBA postponed its AGM scheduled for March 14th in Glasgow, citing concerns about gatherings and COVID-19. Questions about the renovation project and finances were likely to be raised at the event.

Voting in the RSPBA comprises only designated secretaries of each band, excluding “overseas” bands that are required to become “members” in order to compete at their competitions.

The financial statement also indicates that wages for the organization’s full time staff of five are about £132,448 annually, or about £10,800 a month, indicating that the £8,000 on the balance sheet at the end of 2019 had been used up.

The statement to members also cautioned bands to be judicious about making travel arrangements, presumably because of the uncertainty around its competitions.

“Do they think we leave our travel bookings to a month before contests?” said a player from an RSPBA-member band, who spoke on condition that his name not be used. “We will lose out. The directors won’t, as the association pays all their expenses.”

The RSPBA’s financial statement outlines comparative revenues from and expenditures for 2019 championships, its college and the World Solo Drumming Championships.

Prize money for all bands at the World Championships was £37,838, and payments for judges, stewards and administrators totaled £41,679. The organization spent £4,290 on “Catering and entertainment” at the World’s, and £2,099 on “Dancers [sic] expenses,” presumably for the Highland dancing competitions that are run by the Royal Scottish Official Board of Highland Dancing in conjunction with the major pipe band events. The RSOBHD lists their event at the World Pipe Band Championships the “RSPBA Open Championship.” 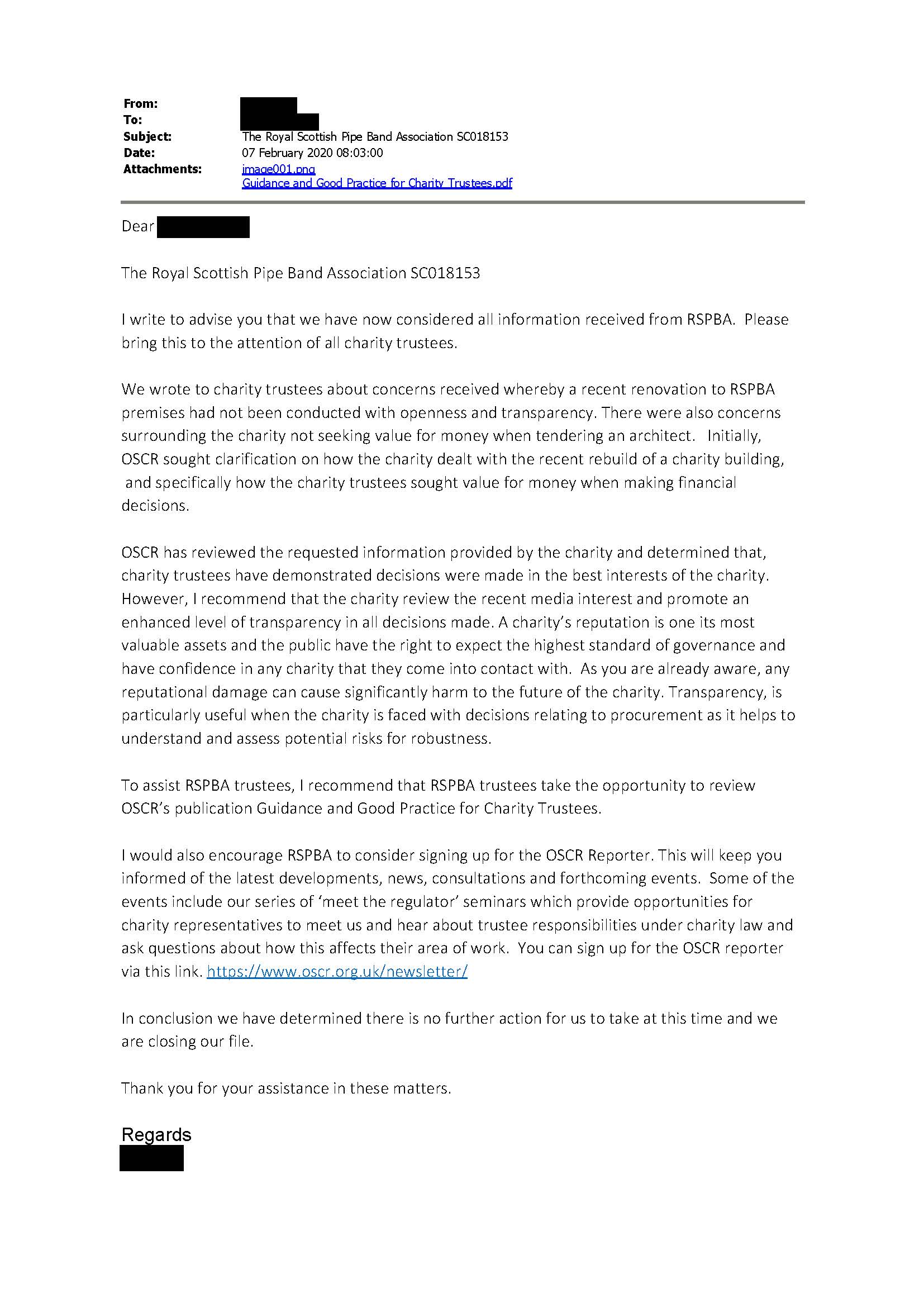 There are approximately 40 pipe band judges at the World’s. The association stated that expenses for judges alone amounted to £19,714, or an average of £492.85 per judge, allegedly more than the Grade 1 band that placed sixth. The RSPBA does not disclose a breakdown of World Championships prize money.

While the World Solo Drumming Championships offer nothing in prize money or even complimentary products from sponsors, the RSPBA spent £1,866 on administrators’ expenses, and £5,311 on judges.

The RSPBA was under scrutiny by the Office of Scottish Charities Regulator (OSCR) for its handling of the headquarters renovation. The OSCR elected not to proceed with an official inquiry, but pipes|drums has obtained the letter sent to the RSPBA by the OSCR’s inquiry office, which states:

“I recommend that the charity review the recent media interest and promote an enhanced level of transparency in all decisions made. A charity’s reputation is one its most valuable assets and the public have the right to expect the highest standard of governance and have confidence in any charity that they come into contact with. As you are already aware, any reputation damage can cause significantly harm to the future of the charity. Transparency, is particularly useful when the charity is faced with decisions relating to procurement as it helps to understand and assess potential risks for robustness.

“To assist RSPBA trustees, I recommend that RSPBA trustees take the opportunity to review OSCR’s publication Guidance and Good Practice for Charity Trustees.”

Ironically, despite being advised to be more transparent with its members, the RSPBA has not revealed the entire content of the letter from the OSCR.

In addition, others are wondering what the association might have done instead with the money that it had on reserve before they spent it on the renovation.

“Quite simply put, people foresaw and warned that the expenditure of the entire bank balance on the renovation was reckless and made the organisation vulnerable in the event of an unforeseen emergency,” said Tyler Fry, the world renowned tenor drummer who was one of those who spoke out on the situation before. “This fell on deaf ears and they were dismissed as malicious troublemakers. I’ve heard it said that the project and finances were meticulously planned, but with no apparent risk management strategy. They took a gamble with the finances that seems to have backfired. Surely those responsible must now realize that their past decisions that seemed okay at the time clearly weren’t okay at all. There must be dozens of bands that will now lose payments made on travel and accommodation who will now find themselves in hardship as a result of the cancellation of events. Those bands must now be wondering how the money spent on all of the boastful features of the new and improved headquarters that they will likely never set foot in could have been used to help alleviate their predicaments. What use is that building and an empty bank account in the monumental crisis facing our art?”

At publication time, it was rumoured that an emergency conference call of RSPBA member-band secretaries could be in the works to discuss the RSPBA’s behaviour, the financial situation and alternative ideas to sustain the 2020 competition season.

Stay tuned to pipes|drums for more on this developing story.

RSPBA says there is “no formal inquiry” by Office of Scottish Charities Register, just “a few questions”

Opinion – RSPBA Management Concerns: is the current Management Structure of the RSPBA out of date?

After five weeks, RSPBA yet to produce documentation on building project

Opinion: A call for RSPBA transparency