Perhaps as a gesture of good faith that bands will only improve after returning to competition following two seasons of dormancy, the UK’s Royal Scottish Pipe Band Association only upgraded 19 bands and downgraded none for 2023.

Despite solid seasons in Grade 2 by Scotland’s Buchan Peterson Northern Ireland’s Ravara, each winning two of the five RSPBA championships, neither band was elevated to Grade 1. Buchan Peterson took the RSPBA’s Grade 2 Champion of Champions title with 26 points aggregated, against the 21 points accrued by Ravara.

The Johnston Pipe Band organization’s Grade 3 band, Champion of Champions winners in their grade, was elevated to Grade 2. Like Ravara, Johnstone had 21 points. But both Johnstone Grade 3 and Ravara did not attend the UK and European championships, respectively.

With Johnstone maintaining a Grade 1 band in its extensive and successful teaching program, the inevitable question arises as to if the organization will have a Grade 2 band working to reach Grade 1, a situation that organizations in the past have decided is ultimately untenable.

“We were delighted with the performances of our Grade 3A band during the 2022 season and plan to embrace the challenge of both bands competing in the top two grades,” said Keith Bowes Jr., pipe-major of the Johnstone Grade 1 band. “The feeder band has had a rapid ascent through the grades in recent years and we plan to use it as a further platform to prepare our young people for the Grade 1 band.”

It helps that Bowes’s father, Keith Sr., runs the now-Grade 2 band, so misunderstandings will undoubtedly be avoided.

I personally couldn’t and wouldn’t want to curtail the enthusiasm of a band wanting to continue to rise through the grades. – Keith Bowes Jr.

“With my father being pipe-major of the Grade 2 band, one of his main objectives is to supply the Grade 1 band with talent for the future, while striking a balance of trying to play at as high a standard with the feeder band. While we see this as a challenge, we don’t envisage too many problems occurring, especially when both pipe-majors have a shared vision for the organization.”

Rather than run two Grade 1 bands competing against one another, some pipe band organizations with both Grade 1 and Grade 2 bands eventually elected to dissolve their Grade 2 band when they became so successful that they were upgraded. Boghall & Bathgate Caledonia in 2003, Simon Fraser University in 2006, and Toronto Police in 2004 were three instances from the past.

“I personally couldn’t and wouldn’t want to curtail the enthusiasm of a band wanting to continue to rise through the grades,” Bowes continued. ‘The organization continues to flourish through its close working relationship with the Renfrewshire Schools Pipe Band.”

Bowes added that the Grade 1 band has added top-flight solo piper Gordon McCready to its ranks. “With his years of playing with Field Marshal Montgomery, I’m certain he will add much experience and talent to our band,” Bowes added.

The RSPBA once again regraded a non-member band, by elevating Brisbane Boys’ College of Australia to Grade 3B following the group’s visit to Scotland in August.

Music Board & Standards and Grading Group Convenor Malcolm Brown-Scott was not immediately available for comment.

Grade 3B to Grade 3A

Grade 4A to Grade 3B

Grade 4A to Grade 3A

Grade 4B to Grade 4A

Novice Juvenile A to Juvenile 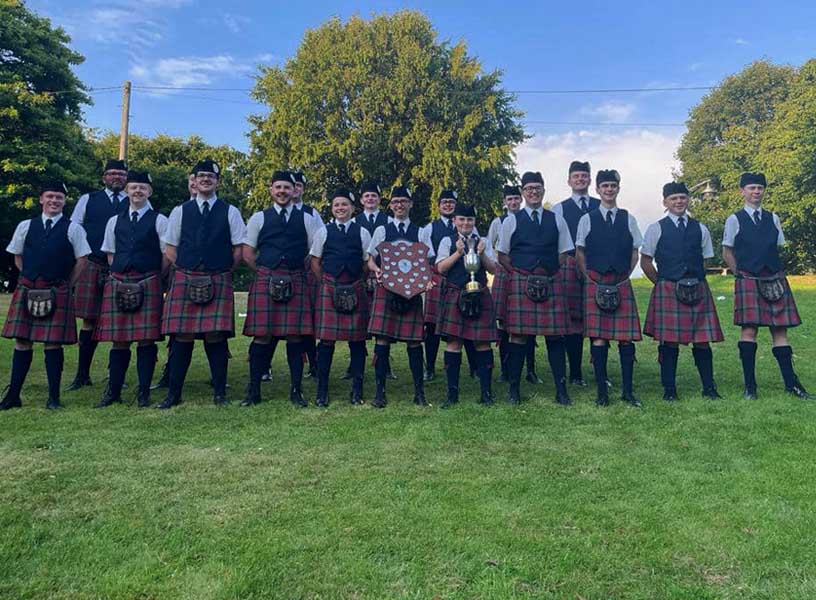