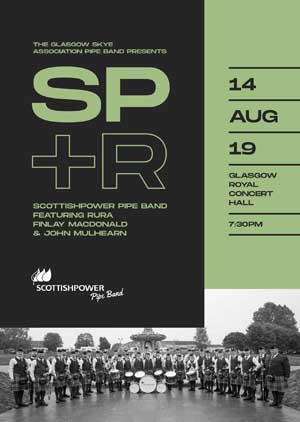 The show will be named “SP+R” – as in ScottishPower plus Rura – as the Glasgow based Grade 1 pipe band combines with the folk group Rura and pipe music innovators Finlay MacDonald and John Mulhearn to stage the annual “Pre-World’s Concert” on August 14, either two or three days before the competition at Glasgow Green.

The timing of course depends on whether the RSPBA decides to reduce the normal two-day event to only one, presumably basing their decision on feedback from a survey of Grade 1 bands planning to compete at the event.

Planning, learning and preparing a two-hour concert is a massive effort for a Grade 1 band, which also has to focus on purely competitive demands. The gig is one that realistically only a handful of top-tier bands could reliably take on, to fill the 2500-seat Glasgow Royal Concert Hall.

It’s often assumed that getting the Pre-World’s Concert gig provides a boost to bands, like ScottishPower, that are in the running to win the World Championship. ScottishPower hasn’t yet won the title, though the band has come second and has picked off other RSPBA majors, including the 2018 British Championship.

“The sheer amount of material that is involved in putting on a World’s concert means that the band has to be working more intensely than usual in order to learn and perfect it all,” ScotishPower Pipe-Major Chris Armstrong said. “The effort’s more than doubled to do so. I think this alone over the course of a full winter and competitive season leads to an improvement in the band overall. You can hear this year on year with any band who takes up the challenge of the concert.”

Actually winning the World’s a few days after the grueling concert is another thing altogether. While the best band generally is agreed to have won, variables like weather, order of play, musical preferences of judges and pure dumb luck can play a major role in capturing the prize.

“Whether the concert is advantageous for the World’s or gives you a boost during the season is questionable, though,” Armstrong added. “The volume of work means more effort is required across the board, which in turn leads to a noticeable improvement. When it comes to competition, though, you are still dealing with producing a performance in different circumstances and under a different kind of pressure to a concert stage. The workload most definitely helps but it doesn’t change the need to perform to your best in that circle, on the grass at 3:44 pm on the given Saturday.”

Whether this year’s World’s Grade 1 contest will see all bands go through a Friday qualifier round is to be decided. One might assume that, for a band that has delivered a major show on the Wednesday, an extra day of decompression would be useful.

Not necessarily so, according to Armstrong: “I actually prefer [the World’s] as it is. [The two-day format] gives the bands a chance to blow the nerves out of things ahead of the Final, should you make it through. At the end of the day we will do what we need to do given the decision either way.”

The ScottishPower Pipe Band is marking the thirtieth anniversary of its sponsorship with the ScottishPower energy company, previously known as Power of Scotland. “SP+R” is the second time that the band has taken on the Pre-World’s show, previously staging its “Energized” show in 2011. The band has staged several other major concerts since then, including a 2015 show for Bucksburn & District’s spring event in Aberdeen, which was made into a full-length commercial recording.

The Grade 1 Glasgow Skye Association Pipe Band first started its tradition of producing the Pre-World’s Concert in 1994. Whether the band aspires to headline the show itself one day is an intriguing idea.

Tickets for ScottishPower’s SP+R show are available from the Royal Glasgow Concert Hall box office and are priced from £20 each.