Pie-throwing seems underway on social media with new drumhead banter. If you’re one of those people who thinks there’s nae cash in pipe bands, Harry’s a quick study with the math to help you along. Ten snare drummers in a Grade 1 corps, times one new drumhead at £60 = £600 and maybe three heads in the season = £1,800 per band, times 30 Grade 1 and 2 bands equals £54,000. Then, keep piling on the numbers as lower-grade bands swap out equipment to get “that” sound! So, it makes sense that there’s some sparring going on, because the financial rewards are pretty solid. Harry has an excellent head joke here, but he won’t batter you with it. Wouldn’t want to create any tension, or stick his nose in where it’s not welcome. Wait – Harry loves that! 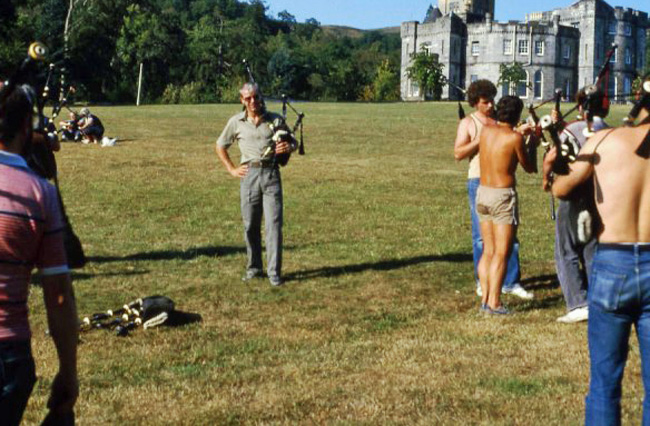 The 70th annual Glengarry Highland Games this year will be honouring the contributions of one William J.R. Livingstone, and Harry sends his best wishes. Henrietta still gets all melty at the thought of P-M Bill warming up the 78th Frasers in those ’80s short-shorts with no shirt and deep, dark island tan, cigarette dangling, like some dreamy mustachioed movie star. Okay, even Harry was a little turned on, but he swears it was “The Mason’s Apron” and not the shorts and that glistening bod. Either way, Harry’s saving pennies for the soon-to-be-released Livingstone memoir by himself, and hoping for some great scoop. As he does.

Got scoop yer ain sel’? Send it to Harry and he promises to give you no credit in his memoir. Unless you want it. Fair is fair.