The Royal Scottish Pipe Band Association’s intention to decide the Grade 1 World Championship by reverting to its pre-2019 format has proven unpopular with the majority of the bands intending to enter.

In fact, only 19% of the 16 bands that responded said that they like the proposed 2020 format, which would see an 18-band, two-day competition, with all bands competing in two qualifying events on the Friday, and then a two-event Saturday comprising 12 finalists to determine the final list.

For the 2019 World’s that had only 15 bands in Grade 1, the RSPBA altered its usual format. All bands competed in Medley and MSR events on both Friday and Saturday, with all results determining the final list.

Grade 1 leaders were asked to provide their preferences on various options, including the current format for the 2020 competition, and, again, we received 16 responses. Percentages are calculated out of 16:

Despite numerous invitations and reminders, two bands did not respond. They did not necessarily “abstain”; we just decided to move on without them. 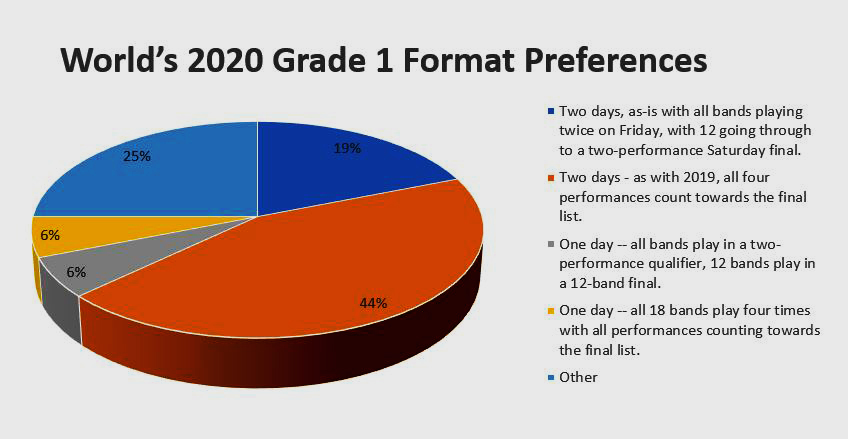 The 2019 format was made after the RSPBA polled pipe band leaders, judges and unidentified “others” for their opinion. Despite a pipes|drums survey of pipe-majors of bands entering the 2019 contest showing that a full 90% wanted a one-day event, the RSPBA went with the two-day affair.

At some point after the 2019 World’s, the RSPBA Music Board amended its rules, which previously reduced the threshold number needed to stage a Grade 1 qualifier at a major championship to 18 or more entries. The threshold number was previously 22 bands, and that number apparently remains for all other grades.

Of note, the RSPBA is allegedly contractually obligated to stage a two-day World Pipe Band Championships. No matter what competing bands might desire, the association’s hands might well be legally tied. The RSPBA has not confirmed whether that alleged two-day obligation is accurate.

No band has said that, after learning of the return to the previous qualifier format, they would cancel their plans to attend the contest. If one band dropped out, the contest would not require a qualifying round and a different format would possibly be implemented.

Following are verbatim comments from leaders. Due to the risk of potential political or judging reprisals, comments were provided on guarantee of anonymity.

“To be honest I don’t really care too much how it plays out. We’ll just do what’s required when it comes down to it. One observation and only my opinion would be that the current format, prior to 2019, produced a better standard of final than what I observed last year. Whatever way it goes though we’ll just do what we need to do.”

“A one-day event with an MSR round and a Medley round.”

“Same as last year! I personally think the commitment and cost of playing at this level then the cost of attending all should play all days at World’s. If the RSPBA only want a certain number, then they need to revise their grading. The years of failing to reach the final on a Saturday resulted in a loss to the game of numerous good players who traditionally never band jumped to the prize winners.”

“I would say the consensus in our band is that Option 4 is unworkable given the enormous demands it would place on the players and their instruments. Option 3 is not much better for the same reason. (As you know, a leading complaint of the old format of a one-day Worlds with a qualifier in the morning was that the bands that had to qualify were physically, mentally and emotionally fried and their instruments soaked by the third event.)

“Spreading things out over two days, as in Options 1 and 2, is only marginally better, in that it is still a huge test of stamina (not music). On the other hand, if all four events were to count towards the final, in theory that should result in a more accurate overall result than you would achieve with just two events.

“There are some variations on the four options presented that might be worth consideration: e.g. Modified Option 1 – all bands play in qualifying heat(s) on Day 1, top 12 play on Day 2 and their scores from the previous day count towards the final. This doesn’t address the issue of the non-qualifying bands not getting to play on Day 2, although it would provide a more equitable opportunity to qualify over two events.

“Probably the most fair thing to do in future years would be to return to a one-day Worlds but restrict Grade 1 to the top 12 or 14 bands, and create a new Grade 2A composed of the bottom 6 from the current Grade 1 and the top of the current Grade 2. Call it Option 5?”

“One day four performances would be pretty cool. It would depend on how it’s structured, and it would be an endurance test but, again, the real champion would prevail in that situation. Two days with qualifier when there are only 18 bands is a joke. It’s totally unfair on the Grade 1 bands. There is no consideration from the RSPBA on the impact of that situation on the actual bands, and no consultation with the bands about what would be the best approach. It’s gone beyond a joke that enforces a structure on us that firstly makes no sense, has no competitive benefit, and in most cases actually impacts the quality of the Saturday performance in a negative way. Two days needs to go in my view.”

“My thoughts are that an alternative option be investigated: One-day contest, MSR & Medley elimination rounds. Medley Final for top eight bands (could be six, could be 10, but have more eliminated).

“Caveat is that points from the elimination rounds are counted toward the final, aggregate result. Also, no pre-qualifying. It’s a biased system.

“Rationale: Unless the two-day event actually incorporates all grades, the Friday has no [attraction]. In fact, it’s quite depressing with only Grade 1 bands there. Two contests for elimination allows for broader evaluation and redemption from small errors or weather. Two contests for elimination provides as much content for listeners, while allowing all bands that invest on being there to perform more than once.

“With elimination points counting in the final, it requires the top bands that would presumably make it through to play their best. No shortcuts.”

“Put simply if you’re not playing on the Saturday, you’re not playing at the World’s. However, you work the qualification round, and if it ends for you on Friday you’re not at the World’s. So, my preference is for every band playing both days. But I understand that the top bands would prefer to play for it on the Saturday and I’m sure the judges would rather their influence on the outcome would be one in eight rather than one in 18.”