Among the queries that secretaries from the RSPBA’s 271 registered UK-based bands might pose at the organization’s March 13th annual general meeting might be, “Why or how was £14,704 spent on ‘Catering and venue hire’ in a 2020 year with little to no opportunity to consume sandwiches and tea together?”

At approximately $26,000, the amount the organization paid for catering and venues in a dormant year would be the entire annual operating budget for other pipe band associations. Conceivably, though, the amounts carried over from late-2019 expenses, but the association did not respond to requests for comment.

The world’s most powerful piping and drumming association issued a 48-page financial statement and order paper to band secretaries outlining exhaustive details about the past year that saw all competitions cancelled and a £1.2-million renovation of its Victorian-era headquarters still unfinished.

Despite a cancelled year, the financial statement shows that the association brought in some £62,263 in memberships, and more than £78,000 in “sponsorships.”

The RSPBA counts its headquarters and furniture as primary “fixed assets” amounting to £492,000 – a further depreciation of £8,228 in the value of the building after the £1.2-million renovation. While the association spent £1.2-million of its members’ money on the renovation of 45 Washington Street, the net value of the property has now increased by only £200,000.

The organization’s annual general meeting reporting on 2019 activities on June 27, 2020, held as an online Zoom conference call, cost £5,253, according to the financial statement. In comparison, the in-person March 2019 AGM held at the Glasgow Trades Hall cost £13,529.

“Heating, light and power” expenses for the association in 2020 increased to £6,050, after costing £2,517 in 2019. The disparity is perhaps due to the headquarters being under renovation for most of 2019, though the building was relatively unused in 2020.

The RSPBA’s 17-member board of directors is looking for a vote on several changes to its rules, including requiring any bands that have allowed their annual membership dues to lapse to pay up to three years in arrears when they re-join the organization. 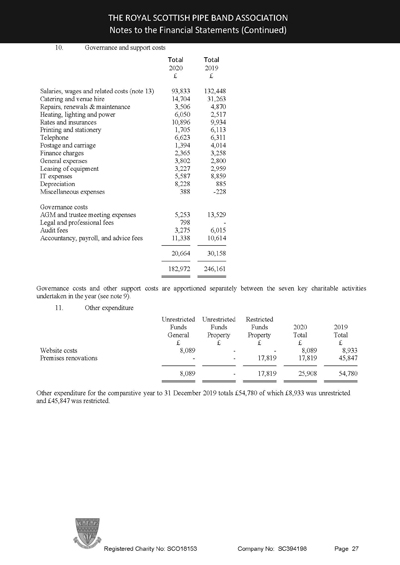 The proposal reads: “Any Band which has so ceased to be a member Band shall be eligible to regain membership by appointing a Member and making payment to The Royal Scottish Pipe Band Association the outstanding Membership Fees (including the late payment penalty) for the arrears period to a maximum of three years.”

Assuming that the new rule would apply retroactively, a UK-based non-juvenile band that was a member in 2019 that didn’t pay its 2020 and 2021 registration fees will also have to pay for both of those years when they join up in 2022, amounting to a bill of as much as £906 for all three years.

To compete in an RSPBA competition, bands that are members of another recognized worldwide association must pay £105. With no competitions in 2020 and a strong possibility of another cancelled year in 2021, “overseas” bands that return to compete at the World Championships, for example, would presumably have to pay a total of £315, should the proposed change be approved.

The RSPBA also charges “overseas” associations £210 annually to be a member, so they’ll be on the hook for £660 if the proposed amendment passes at the meeting.

The proposed change reads: “A Director on duty at a contest will be entitled to claim a Competition Allowance as set by the Finance Committee, and reimbursement of legitimate and receipted expenses.”

If the proposal passes, quorums for meetings of the RSPBA’s board of directors would have to be 50% of those officially on the board, with no fewer than four at any time. Members have contended that snap board meetings had been called in the past with only a handful of directors present, yet going on to pass important new legislation.

Just in time for International Women’s Day on March 8th, the RSPBA proposes eliminating its “Ladies Committee,” which was apparently mandated in its original 1940s constitution, but which has been dormant for several years.

A nomination to make North of England branch director Kevin Reilly chair of the board was put forward by both his branch and the Glasgow & West of Scotland branch. If elected, Reilly would replace incumbent Chair John Hughes, who appears not to be standing for re-election as a director for the Lothian & Borders branch. Reilly held the chair role for a number of years in the aughts.

The RSPBA had announced in September 2020 that Ian Embelton would retire in November as Chief Executive, leaving the association to search for a successor to the role and its £60,000 salary. The search was put on hold due to the prolonged pandemic, Embelton agreed to extend his employment and remains listed as Chief Executive.

According to RSPBA rules, directors cannot also be salaried employees of the organization.

John Wilson, convenor of the Adjudicators’ Panel Management Board, reported on his group’s activities, and gave special mention to long-time RSPBA judges Gordon Craig, Harry Stevenson and Sandy Steele who retired at the end of 2020 due to the association’s mandatory retirement at age 75. “They are a shining example of the level of knowledge, experience and professionalism which the Adjudication Panel can provide for the needs of the Association – and hopefully we can recognize their services personally at some pre-arranged point during 2021,” Wilson wrote.

Embelton, Hughes, and Marketing & Media Committee Convenor Kathleen Robinson did not respond to requests for the organization’s perspective and clarification on the above matters.

pipes|drums heard from several band leaders about the RSPBA’s financial statement and order paper but, regrettably, none would comment without the assurance of anonymity. One secretary said it would be “band suicide” to do so.

Following an investigation in early 2020, the Office of the Scottish Charity Regulator (OSCR) recommended to the RSPBA (Registered Charity No: SCO18153) that the organization be more transparent with its members and the media. All registered charities in the UK, have a duty to communicate clearly and freely with members, sub-groups and the media.

To “continue to function as an organization,” RSPBA solicits 2021 memberships
October 16, 2020

RSPBA asks bands to pay to use renovated headquarters
March 22, 2020