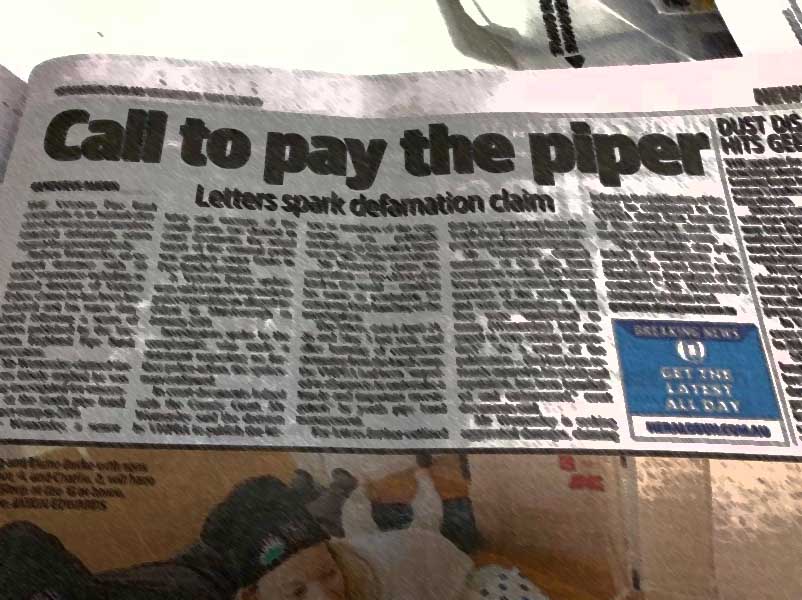 With the headline “Call to pay the piper; letters spark defamation claim, ” the story has also reportedly gained the interest of the prominent investigative reporting television program, Current Affair, which runs on the Nine Channel in Australia.

The case involves a senior drumming tutor and judge, who claims he was defamed and libelled after the Victorian Highland Pipe Band Association published the letters.

He contends that documents, reportedly written on the letterhead of Pipe Bands Australia, falsely implied that he was being investigated for misconduct at the organization’s Youth Pipe Band summer camp in 2019. He alleges that the actual subject of the criminal probe was with a leader within Pipe Bands Australia, the collective association for six state pipe band associations within the country.

The gist of the complicated story:

A request to Pipe Bands Australia President Chris Earl for comment has so far gone unanswered.

According to available court documents, the plaintiff said that publishing the letters to members of the community was politically motivated, as the senior figure was an “ally” of the association. He contends that the publishing of the letters “seriously injured . . . his credit and reputation, [and] has been humiliated and embarrassed.”

The Australian piping and drumming scene has gone through several public controversies over the last five years. In 2016, Pipe Bands Australia suspended several members of the Grade 1 City of Whitehorse for comments made on social media and actions alleged to have occurred at a competition. The band subsequently folded outright.

Pipe Bands Australia was also the subject of a financial fraud scandal in which its former Treasurer was charged with stealing more than AUD$200,000. The former official was eventually found guilty and received a suspended sentence of four years in prison.

A source who spoke on condition of anonymity alleged that there are possibly “three other actions to follow,” including one against Pipe Bands Australia.

The Royal Scottish Pipe Band Association also attracted critical mainstream attention in early 2020 for the renovation of its headquarters.

City of Whitehorse breaks down
Posted on November 28, 2016

See also
News
RSPBA Northern Ireland branch unveils ambitious “Every Beat, Every Note, Every Flourish” tagline
News
Scott MacAulay immortalized with new Performing Arts Centre named in his honour
Read all in News
Get the Newsletter!
Sign up to receive our most popular stories in your inbox every month.
Thank you, you have successfully subscribed for our newsletter, please check your email
We use cookies on our website to give you the most relevant experience by remembering your preferences and repeat visits. By clicking “Accept All”, you consent to the use of ALL the cookies. However, you may visit "Cookie Policy" to provide a controlled consent.
Cookie PolicyReject AllAccept All
Manage consent