According to research, Queen Elizabeth II’s funeral on September 19, 2022, was watched live by more than four-billion people worldwide, making it the most-viewed event or program ever televised.

At the culminating moment, when the Queen’s casket was lowered to her final resting place at King George VI Memorial Chapel, part of St George’s Chapel in Windsor Castle, the Piper to the Sovereign, Pipe-Major Paul Burns, played a poignant rendition of the air “Salute to Willie, the Royal Fendersmith,” making that piece of pipe music the most-heard tune at one time in the history of the Highland bagpipe.

And it was Pipe-Major James Banks MBE who composed the piece following the untimely death of his brother, who worked for many years at Windsor Castle. The tune became a favourite of the Queen, and she specifically requested that it be played at her funeral.

Known as “Jimmy” to just about everyone, Banks is a native of Cardenden, Fife, Scotland, and he lives today in nearby Markinch.

From 1964 on, he enjoyed a distinguished 23-year career with the Scots Guards, completing with distinction the Pipe-Major’s Course at Edinburgh Castle under Captain John A. MacLellan MBE, and served with famous fellow Guards pipe-majors Dixie Ingram, Robert Kilgour, Angus MacDonald, and John Slattery.

Banks received additional instruction from the likes of Captain Andrew Pitkeathly and Alex MacDonald, former piper to King George IV. Though Jimmy Banks competed in solo competitions only sporadically due to his service requirements, at the Argyllshire Gathering he won the March in 1974, and in 1979 the Strathspey & Reel and the Formers Winners MSR on the same day.

Banks led the Pipes & Drums of the 1st Battalion Scots Guards to a win in Grade 2 at the 1984 World Championships and was pipe-major of the Grade 2 Danair Pipe Band (sponsored by the now-defunct Danish airline) for several successful years.

Jimmy Banks is an in-demand judge for solo competitions, including those at the highest level, and in 2001 he was made the first Head of Piping at the National Piping Centre and the original director of the Bachelor of Arts (Scottish Music – Piping) degree program with the Royal Scottish Academy of Music & Drama.

For most of the last decade, he has helped to compile, edit and publish three of the most significant books of pipe music ever produced: The Scots Guards Collection Volume 3 and Volumes 1 and 2 of the Argyll & Sutherland Highlanders Collection.

You can find “Salute to Willie, the Royal Fendersmith” in Scots Guards 3, as well as several more of Banks’s composition in all three collections. We were gratified that Banks granted us permission to include the manuscript of the tune here. 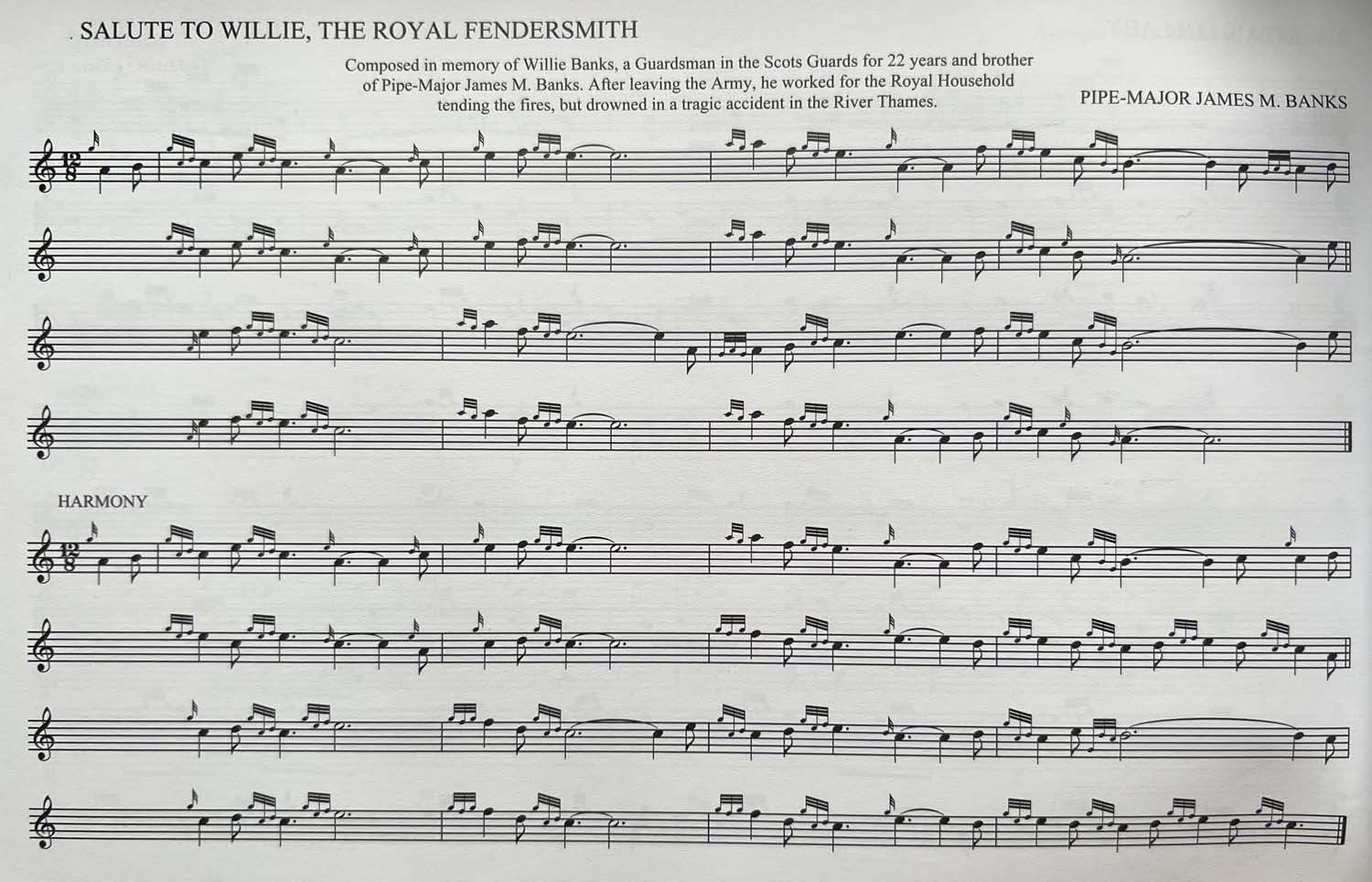 We were additionally gratified when Pipe-Major Jimmy Banks MBE found the time to speak with us about his historic composition, how it came about, and the significance of having the piece played so well before an audience of billions.

Here’s Part 1 of our fascinating talk with the creator of the tune heard by more people at once than other in piping history:

Stay tuned to pipes|drums for Part 2 of our brief interview with Pipe-Major Jimmy Banks MBE. 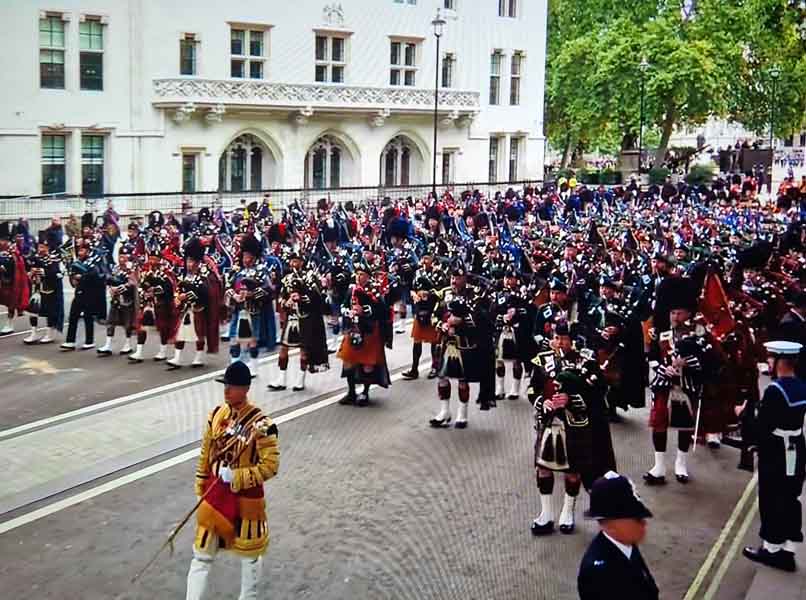 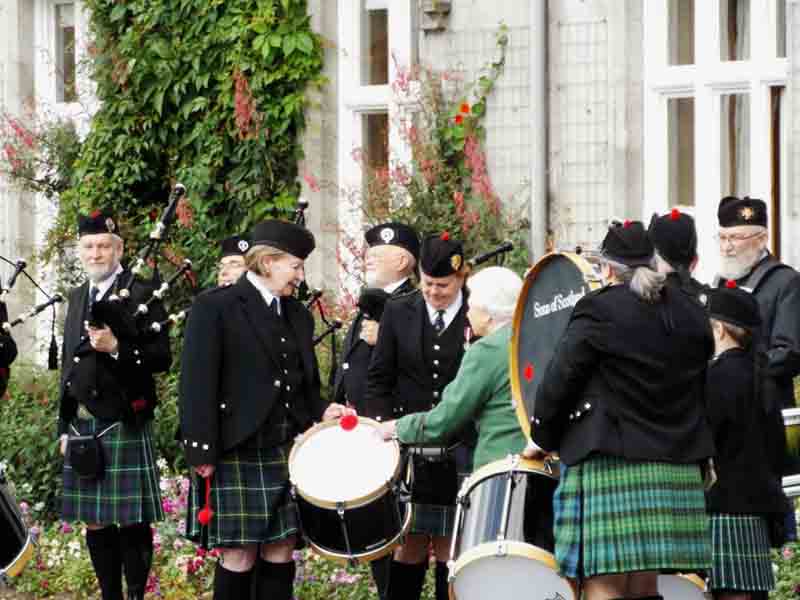 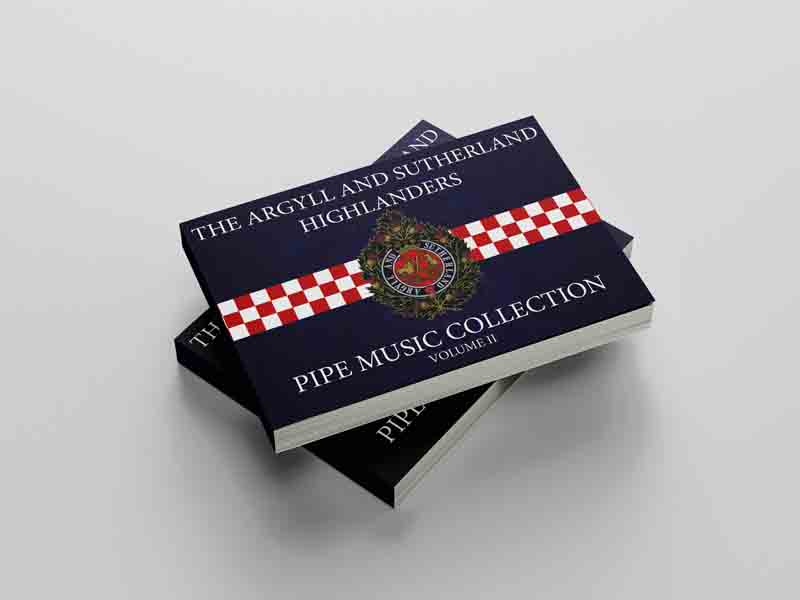