Chanters silenced: a pupil of John MacColl, heroes of Oban

The Argyllshire region of Scotland was especially hard hit by the Great War. Every issue of the Oban Times from 1914 to 1918 would bring news of gallant soldiers lost and, all too frequently, reports of young pipers who fell.

Here we have two reports of clearly rising stars on the solo piping scene, both well liked and one a pupil of the great John MacColl. Who knows what contributions they might have made to the piping and drumming world had they survived the conflict.

Illness and disease were major problems during the war. As many as two-million soldiers died not from wounds, but from disease, including pneumonia brought on by horrid conditions.

As we approach the centenary of the end of World War I in 1918, pipes|drums salutes and remembers the hundreds of brave pipers who gave up their lives for the country with archive reports from the Oban Times and other newspapers of the era.

We hope that you appreciate these tributes.

On Tuesday this week information was received in Oban that Sergeant-Piper Wm. MacNeill, who went out to the Dardanelles with the Argyll Mountain Battery last March, had died from pneumonia on the 18th of August. Though his prominence as a piper, he was well known in Oban and district, and the news of his death will be widely regretted. Sergeant MacNeill was the third son of the late Mr and Mrs Donald MacNeill, Dunvorgan. He was apprenticed to the business of an ironmonger with the Mr John Munro (now John Munro, Ltd.), and was in the firm’s employment until his departure for Bedford in August of last year.

In early youth he took up the study of bagpipe music, and was a pupil of the famous Oban piper, John MacColl, now resident in Glasgow. Until his tuition MacNeill made great progress, and became an excellent player. He competed in the Argyllshire Gathering games in Oban and at other Highland Gatherings, being a frequent prize-winner. Ever willing to assist, his services as a piper were much in demand at social gatherings and musical functions.

He was connected with the Volunteers for a number of years, and when that Force ceased to exist, he transferred to the Territorials, being from the first Pipe-Major of the Oban Section of the Argyll Mountain Battery. He was also for some years in charge of the Oban Boys Brigade Pipe Band. His brother George is a Sergeant in the 1/8th Argyll and Sutherland Highlanders, and his father, who was an enthusiastic Volunteer, possessed the long service medal.

Sergeant Piper MacNeill is survived by his wife and a child, and to her and to all his relatives the fullest sympathy of the public goes out in their bereavement.

The portrait of the late Sergeant Piper William MacNeill, of the Argyll Mountain Battery, will be readily recognized in Oban and district, where he was a well-known and popular figure. Piper MacNeill went to the Dardanelles with his Battery in March last, and news of his recent death from pneumonia was received with the deepest regret. At local piping competitions, musical and social functions the late Piper MacNeill was a general favourite, and will be greatly missed. 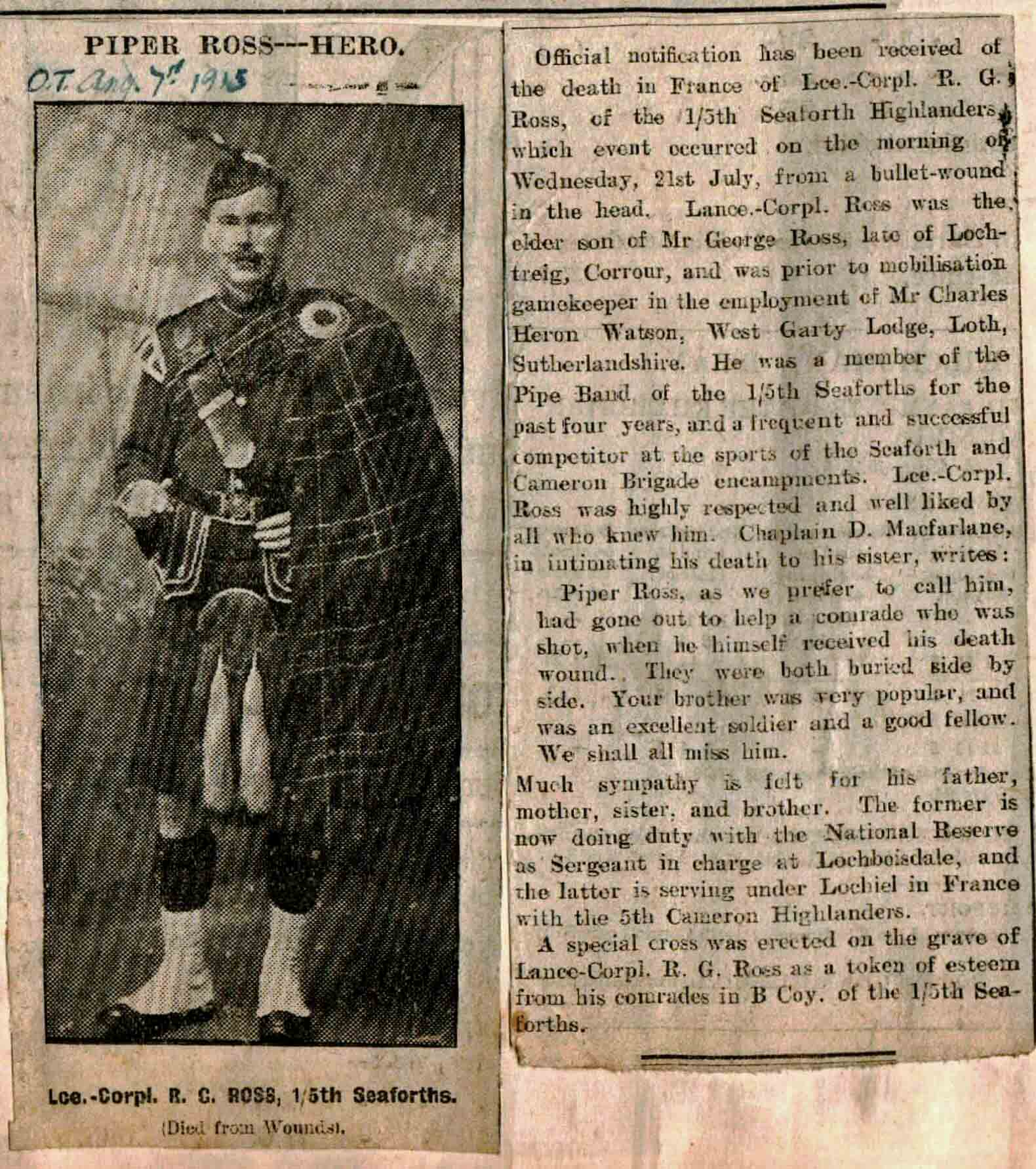 Official notification has been received of the death in France of Lce.-Corpl. R.G. Ross, of the 1/5th Seaforth Highlanders, which event occurred on the morning of Wednesday, 21st July, from a bullet wound in the head. Lnc.-Crpl. Ross was the elder son of Mr George Ross, late of Lochtrieg, Corrour, and was prior to mobilisation gamekeeper in the employment of Mr Charles Heron Watson, West Garty Lodge, Loth, Sutherlandshire. He was a member of the Pipe Band of the 1/5th Seaforths for the past four years, and a frequent and successful competitor at the sports of the Seaforth and Cameron Brigade encampments. Lce.-Corpl. Ross was highlight respected and well-liked by all who knew him. Chaplain D. Macfarlane, in intimating his death to his sister, writes:

Piper Ross, as we prefer to call him, had gone out to help a comrade who was shot, when he himself received his death wound. They were both buried side by side. Your brother was very popular, and was an excellent soldier and a good fellow. We shall all miss him.

Much sympathy is felt for his father, mother, sister, and brother. The former is now doing duty with the National Reserve as Sergeant in charge at Lochboisdale, and the latter is serving under Lochiel in France with the 5th Cameron Highlanders.

A special cross was erected on the grave of Lance-Corpl. R.G. Ross as a token of esteem from his comrades in B Coy. of the 1/5th Seaforths.

Stay tuned to pipes|drums for more archive pieces on pipers who died in the Great War.