The Competing Pipers Association and the Solo Piping Judges Association have confirmed that their respective code of conduct policies that require members not to compete when their teacher is judging, or judge when their student is competing, respectively, are expected to be adhered to anywhere their members are competing or judging.

The question came to light when the United States Piping Foundation (USPF) announced that two opponents of the SPJA’s policy have been hired to judge their annual professional solo piping competition. 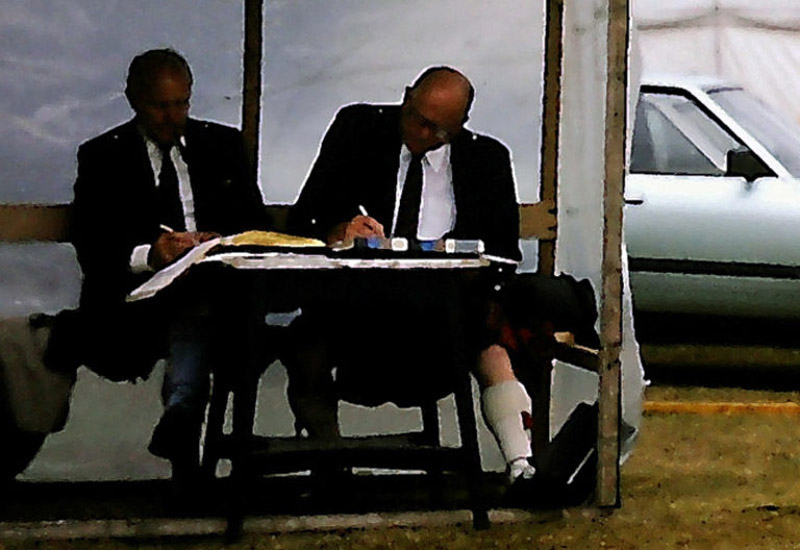 Bill Livingstone, an accredited adjudicator with the Pipers & Pipe Band Society of Ontario (PPBSO) and the 60-member UK-based Solo Piping Judges Association (SPJA), and Robert Wallace, who apparently has no current accreditation with any organization after resigning his SPJA membership, are scheduled to judge the June 16th event at the University of Delaware in Newark, Delaware.

Livingstone and Wallace, along with a few other SPJA members, last fall expressed their support of Australia-based SPJA member Malcolm McRae, who called for the SPJA to rescind its policy against teachers judging pupils.

The USPF competition is run independently and has no formal connection with the Eastern United States Pipe Band Association (EUSPBA) or any other piping association, so it is free to create rules and hire judges as it desires.

But the event and the increasingly global nature of top-level piping and drumming prompted the question: If a judge or competitor is a member of an association with conflict of interest policies, are they expected to adhere to those policies regardless of where they judge or compete?

SPJA Chair Colin MacLellan said that his organization makes no stipulation as to whether its policies for member judges pertain only to the UK or worldwide, but that they should be respected wherever its members adjudicate. MacLellan added that the SPJA is planning to address the issue in more detail at a meeting in early March.

Similarly, CPA President Glenn Brown confirmed that his organization’s members are expected to follow CPA policy to avoid competing when their teacher is judging: “As our CPA members are global, and we’re trying to avoid this issue of pupils playing for teachers, the CPA would hope that its number one rule in the code of conduct is respected and adhered to.”

Other associations around the world have conflict of interest policies in their codes of conduct for competitors and judges. The EUSPBA has a policy that its judges should not adjudicate their students.

“We do have a policy that when it [is] . . . possible, teachers do not judge their students,” Eastern United States Pipe Band Association (EUSPBA) President Jim Dillahey said. “That is sometimes rather difficult given the geographical nature of the association. But we do expect our judges to make the games aware of which events they have students playing so that possible changes in judging assignment can be made.”

While the Pipers & Pipe Band Society of Ontario (PPBSO) asks judges to declare their teaching interests when they complete competition availability forms, there is no formal policy or rule against teachers judging their individual pupils or bands for whom they conduct workshops. The organization’s Music Committee is supposed to address such conflicts when it assigns judges to events.

However, the PPBSO and EUSPBA each have hard and fast rules that judges cannot judge immediate family members at their competitions, but the PPBSO’s code of conduct for judges does not include a stipulation against judging family.

“My initial thought earlier was that we would hope that they wouldn’t [judge family], but that we couldn’t expect them to bow out if asked to in the other jurisdiction,” said PPBSO President Chris Buchanan. “The prohibition on judging family is part of our rule book and isn’t something that’s covered by the Code of Conduct. So while the Code covers judges when they are judging outside of Ontario, I don’t know that the rule book does. The Code of Conduct does explicitly state that judges are expected to follow the rules of the jurisdiction that they’re judging in, and based on that I would expect that we would want to defer to whatever is considered appropriate at that venue, barring things that would otherwise violate the Code of Conduct of course.”

“The USPF has a long track record of bringing adjudicators of an international calibre to judge the events in a first-class setting, and this year is no different,” said USPF organizer Michael Rogers. “The organizers are still in the process of establishing all the adjudicators for this year’s events, but Rob Wallace and Bill Livingstone are confirmed to judge the Professional Piobaireachd. Both have judged at the USPF at different times in the past.”

Rogers added that the contest does not specifically ask adjudicators to refrain from judging their students. “The USPF does not currently have a formal policy on this issue. Whether there will be one in the future is undetermined. If individuals considering participating in the USPF events have concerns, they are certainly encouraged to share those with the organizers so that those views can be considered in future decisions.”

However, if both the SPJA and the CPA each expect its members always to honour their no-teachers-judging-students Code of Conduct policies, the issue is essentially moot for many or even all of the competitors at the USPF or any other high-profile professional competition that attracts CPA members or employs judges who are members of the SPJA. 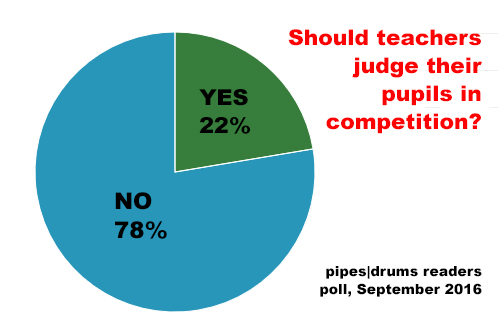 In separate pipes|drums Polls, approximately four-fifths of respondents said that teachers should not judge their students in competition.

The USPF can be entered by any North American resident piper graded Professional or Open. The event used to be an invitational competition and a designated qualifying event for the Glenfiddich Championship, and as a result attracted top pipers from the UK. When the Glenfiddich organizers dropped the USPF as a qualifier event, the USPF restricted entry only to “North American domiciled” pipers.

The USPF by no means owns the issue. With associations like the SPJA and CPA expecting their accredited judges and competitor-members to adhere to their policies regardless of where they adjudicate or compete, the matter could take care of itself for many top-grade competitions that employ SPJA member-judges and/or attract CPA member-competitors, or indeed judges and contestants who belong to other associations with similar policies.

Disclosure: the editor of pipes|drums has written an editorial in favour of rules preventing teachers from judging their students.