The Internet – February 2, 2021 – The first Bruce Gandy Bagpiping Development Society charitable Open Professional and Open Amateur solo piping competitions were won by Calum Watson of Glasgow and Joe Biggs of Lombard, Illinois, respectively, after nearly 82 recorded video entries were assessed by a panel of eight judges. Watson received a custom flask donated by McCallum Bagpipes, and Biggs got a pipe bag of his choice from Lee & Sons Bagpipes.

The judges each contributed their time to the event and, to enter, contestants made a contribution of $10 to the charity.

There were two “open” categories for pipers with a professional grading and those with an amateur classification at any level.

The overall results were determined by taking all rankings in each category and then throwing out both the high and the low scores from the eight judges, leaving the other six ratings to decide the prize lists.

“The Henningham Reunion” by Bruce Gandy and Donald MacLeod’s “The Hen’s March” are well known published tunes, but “The Killer Bees” by Watson himself isn’t yet. The name of the 12/8 jig is actually from the headline to a pipes|drums article reporting on the 2018 Argyllshire Gathering when Watson and Liam Kernaghan of New Zealand won each of the B-Grade events. We are pleased to publish the composition for the first time here with Watson’s permission. Just click on the image: 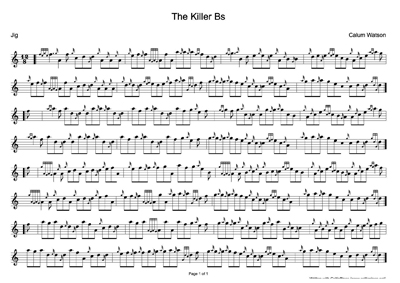 Bruce Gandy was voted Piper of the Year in the 2020 pipes|drums New Year’s Honours, in part for his charitable work that includes this competition.