Invergordon Distillery back in the pipe band game

Answer: they are all the beneficiaries of a sponsorship from Invergordon Distillery.

Ross & Cromarty Pipes & Drums School has secured a financial deal with the famous north of Scotland whisky-maker that will see the band kitted out with uniforms, instruments, and other gear under the guidance of Highland Society of London Gold Medallist Pipe-Major Niall Matheson and Lead-Drummer Roy Hamilton. 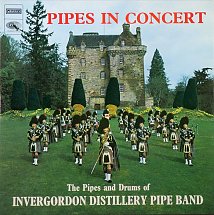 The Invergordon Distillery Pipe Band of the 1960s and ’70s is one of the most famous groups in the history of piping and drumming. In the late-1960s, the distiller set out to create world-class band and recruited many of the greatest players of the era, with Shaw-Ramsay as pipe-major and Duthart as lead-drummer. The band won every championship apart from the World’s and made a renowned full length recording that featured “The Old Woman’s Lullaby,” the first pipe band rendition of a piobaireachd, before eventually folding in the early 1970s.

“I was fortunate to be part of Invergordon Distillery Pipe Band,” said Ross & Cromarty chair John Weatherston (no relation to the late famous piper and pipe-maker). “I joined at 12 years old and began my drumming journey by getting taught by Kit Reynolds. As I am still an active drummer within RACPADS, I know how expensive it is to run a pipe band with costs for uniform, instruments, and buses to the competitions, it all adds up very quickly. Having this sponsorship will help ease the pressure and let us concentrate on our music.”

The band – “RACPADS,” as they’re known casually – like most others last competed in 2019. The group finished in the Grade 3A prizes at one major championships, with a sixth at the European.

The Invergordon Distillery company operates in Invergordon in Ross and Cromarty, Scotland, beginning production in 1961. Its parent company is Whyte & Mackay, which also operated Tamnavulin, Dalmore, Jura and Fettercairn distilleries.

Ross & Cromarty Pipes & Drums School was started in 2014 and continues as a group for pipers and drummers from the area ages seven to 17. Also like almost every other band, RACPADS are actively recruiting new members, including, presumably, any available Gold Medallists and World Solo Drumming champions.

The band confirmed that its name will remain the same under the sponsorship, and financial terms were not disclosed, but is a lump sum to see the band through several seasons.

“Maybe one day we will make it as big as the original Invergordon Distillery Pipe Band. Until then we are going to work hard and have a band in the area that the community will be proud of,” Weatherston added.