The third in our series of videos from the Pipes+Drums Recital at the 2016 Piping Live! Glasgow International Piping Festival is our most historic yet: the final public solo performance while still a competitor by Jim Kilpatrick, the greatest competitive pipe band drummer in history, accompanied by one of the greatest solo pipers in history, Roddy MacLeod.

Kilpatrick and MacLeod were lead-drummer and pipe-major of the Grade 1 Spirit of Scotland, which made its return to the World Championships for the first time since the band of all-star players’ debut in 2008. 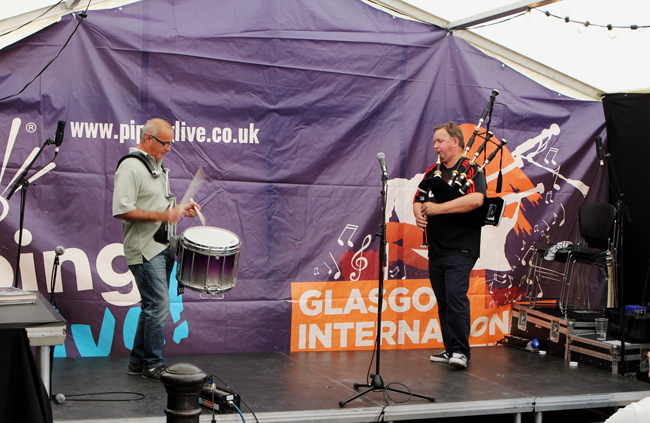 The Pipes+Drums Recital is an event put on just about every year at the Street Café outside of the National Piping Centre during the August festival. Free to all, this year’s event attracted the largest crowd ever, and probably the biggest gathering of any event at the venue. Eager listeners were about 10 deep, spilling nearly onto the street, trying to witness this historic appearance.

We’ll bring you the Roddy MacLeod and Jim Kilpatrick performances in two parts, and we hope that you enjoy this first installment of videos by these living legends of the piping and drumming world.