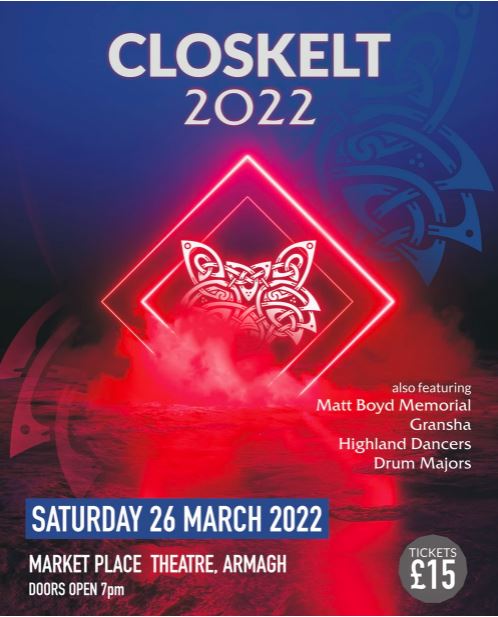 The 400-seat Market Place Theatre in Armagh, Northern Ireland, will be the venue of an important event, when Closkelt makes its first public performance as a Grade 1 band and marks a return to some kind of post-pandemic normal for the pipe band world.

“Closkelt 2022” on March 26th places the band on stage for its first full-length show, with tickets priced at £15 and available now online.

Also on the bill are performances by the Grade 3 Matt Boyd Memorial, Grade 4 Gransha, the Kathryn Stewart Highland Dancers and a number of drum-majors.

The last time Closkelt performed was in August 2019 when the band was second to St. Thomas Alumni of Texas in Grade 2 at the World Pipe Band Championships. Closkelt won the 2019 Grade 2 RSPBA Champion of Champions season aggregate award, propelling the band to Grade 1 along with St. Thomas Alumni.

The concert will also mark the debut of Brendan Megoran as Closkelt’s lead-drummer. Megoran took the role in August 2021. Megoran officially followed Gary Corkin, who was appointed in June 2020 when the world was still hoping and assuming that there would be a 2021 competition season.

Corkin had been the replacement for Alastair Hopper, who stepped down after the band’s success on its route to the top grade.

Closkelt is a pipe band world success story. The group was Grade 4B in 2010 when Pipe-Major David David Chesney took on the role. At the time, Chesney as still a piper with Grade 1 St. Laurence O’Toole. He’s one of the world’s most in-demand reedmakers, and offers a line of popular pipe chanters.

Closkelt is a hamlet between Castlewellan and Banbridge in County Down, and for logistical reasons, the band practices in Craigavon.