Hump day of Piping Live! week—or “we better start making cuts day” as it is sometimes thought of in the pipe bands—featured enough good weather to keep bands playing on Buchanan Street, and enough rain to keep the Street Café at prime attendance most of the day.

A new initiative this year is a series of workshops offered Wednesday and Thursday all day. “Learn Live!” features experts in the art presenting on a variety of topics, and all classes run at the Royal Conservatoire of Scotland, just down from the National Piping Centre. Want to learn about setting up a pipe band with Richard Parkes and Keith Orr? Or maybe piobaireachd with Patricia and Murray Henderson? Pipe band medleys construction with Robert Mathieson and Terry Lee? There’s a lot there, and it all goes again Thursday with a fresh set of classes.

Jack and Andrew Lee filled the auditorium for their father/son Lunchtime Recital, and both delivered crisp performances on bagpipes made by Andrew. The family theme at the recitals this year has been interesting, and offers some variety and interest to these events. Jack Lee played the late Captain John MacLellan’s “The Edinburgh Piobaireachd,” which is a tune that we’ll hear more of as time goes on.

One of the big attractions of the day was the McCallum Bagpipes presentation in the Street Café, which featured a Royal Burgh of Annan mini band, Fred Morrison, Gordon McCready, Willie McCallum, Scott Garden and Scott Figgins duo, and Stuart Liddell. This was a packed session, with crowds standing at the back, and the performers delivered to an enthusiastic audience. Sponsors such as McCallum Bagpipes, R.G. Hardie, Bannatyne Bags, G1 Reeds, and Specsavers make a huge contribution to the free programming available at Piping Live! This year, the festival has signs sprinkled through the Street Café encouraging spectators to donate money by text. 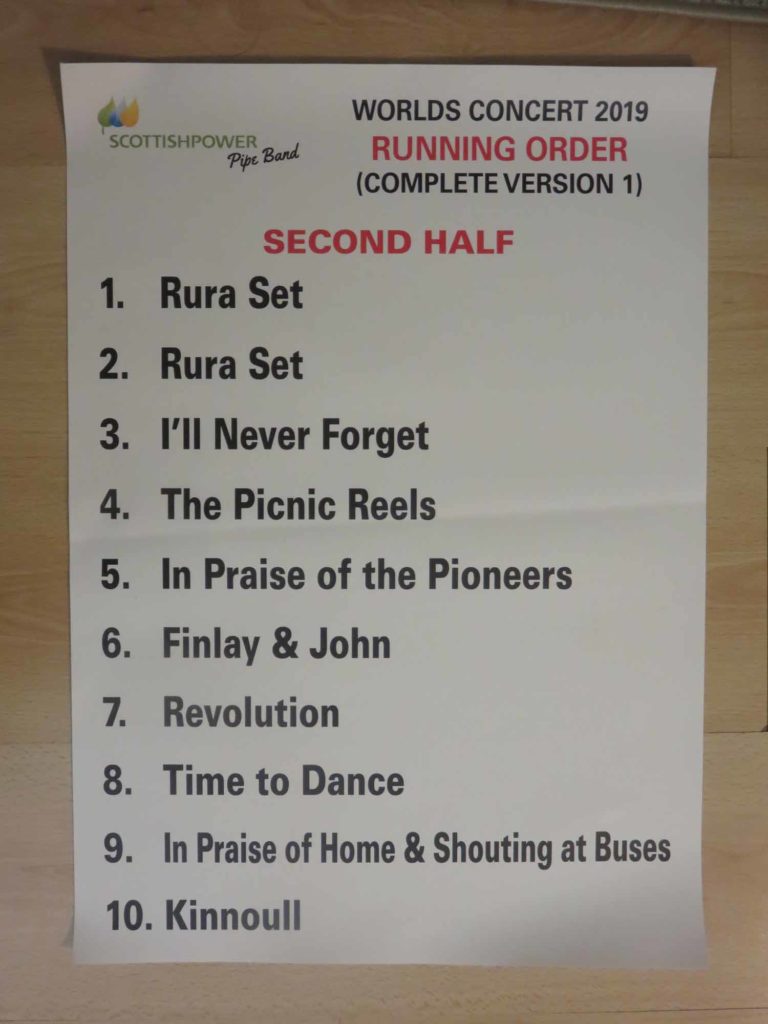 The CLASP amateur solo piping events have been running all week and winners were announced today, and in Pipe Idol Scotland’s Chris Happs came out on top today to make his way to the final.

The Armagh Pipers Club closed out the Street Café today, appearing at the festival for the 15th consecutive year, and there was a concentrated bustle of activity as people raced to get fed and find their way to the Royal Concert Hall for the ScottishPower concert.

Things are getting tense in the bands as the week runs forward to the big contest days, and word has it that psychologist Dr. Stephanie Burns has been doing some work with individual bands getting ready for the weekend. It’s down to details now.