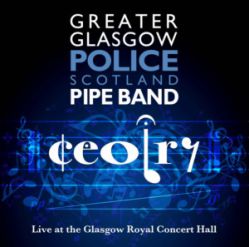 Having played in a police band that no longer exists (Lothian & Borders), I was intrigued to find out how the Greater Glasgow Police Pipe Band had morphed into their current form. The merger of eight police forces into one – Police Scotland – was never going to be easy and, truth to tell, police bands were not even on the radar. No one likes to see any pipe band cease to exist, so how did the Strathclyde boys and girls manage to keep it all together?

In short Pipe-Major Duncan Nicholson and Pipe-Sergeant Iain Macpherson stepped up to the plate. While they wanted to take the band forward, one of the main objectives was to preserve the band’s history and protect the legacy. It was brutal and it was bloody, but that’s show business. A lot more could be said, but that’s for another day. The fact is they are still here as a police band, competitive in Grade 1 and loving what they do. So for that alone, folks, hats off.

I popped through to Glasgow for a pre-concert chat with Duncan who has been playing with the band for 14 years. Originally from Mallaig, Scotland, Duncan was taught by his father, Donald, who still resides in Barra, and then went for tuition to the late, great Evan MacRae from Fort William, Scotland.

I asked him what the main challenges have been since taking over in 2011, and how he found preparing for a major concert during the World’s week. To paraphrase, the political struggle within the police circles continues and no one is certain what the longer-term future holds. The “police” still contribute towards the band’s annual budget, but things, like most organizations these days, are tight and the band still relies heavily on other sponsorship from instrument manufacturers like McCallum Bagpipes.

As far as the Concert vs. World’s question he said, “I spoke to Stuart Liddell about this very thing when we agreed to take it on. To be honest there are pros and cons. Everyone is flat-out practicing and playing pipes and drums, so that’s good but the focus is a bit diluted. The repertoire for the . . .