concert is huge and it was an immense effort from everyone to memorize it, never mind get it up to standard. Then you have the other musicians and instruments to integrate into the show. You have the unseen administration to take care of and oh, yes, we have to prepare for the biggest contest of the year. Most of our prep has been done indoors, for obvious reasons, so the weather will be a big impact when we get outside. Plus, we only have one day to prepare for the qualifier that is on Friday.”

“Spinning plates” doesn’t do this schedule justice. Perhaps only those who have been involved in this Pre-World’s Concert can really appreciate the significant challenges and the fantastic effort it takes from the group to meet them.

The fear an tighe for the Ceolry concert was John Wilson, a former Pipe-Sergeant of the Glasgow/Strathclyde Police Pipe band, and John’s piping pedigree is well known. His voice is synonymous with big occasion piping events. His presence, stature and ability put an audience at ease and they know they are in very safe hands. He really is that good.

The word “Ceolry” is an adaptation of the Gaelic adjective “Ceolraidh,” which means, simply, “musical,” and Nicholson, MacPherson, Leading-Drummer Eric Ward and the band wanted to be identified with a strong Hebridean theme that had “drive, swing and emotion in their music.” They also wanted a nod to the past and acknowledge the strong tradition of Highlanders coming to Glasgow to join the police and the band, such as John MacDonald and Angus MacDonald, both previous pipe-majors.

So let’s get to the concert itself.

Perhaps one of the main hurdles on an evening like this is getting and holding a sound. Pipers and drummers are fanatics where this is concerned, and with ambient temperature, moisture and acoustics it’s a real challenge. I always like to see how bands go about their business in this respect.

The band started with some hornpipes and jigs, “Do Da Prelude,” composed by the P-M himself, “Do Da,” “Ten Years on Tuesday” and “Nelson Mandela’s Welcome to Glasgow.” Without missing a beat they went into the second number, another set of hornpipes, “Mrs. Lillian Magee,” “White Mountain Weasel” and the Gordon Duncan composition “The Ramnee Ceilidh.” I particularly like this set. Very musical.

The band had laid out their stall and put down a marker for the show. They were not going to hang about and these two opening set were full of drive. A great start.

A change of pace saw Gaelic singer Rachel Walker take the stage. The 2013 Gaelic Singer of the Year started with a piobaireachd-style song “Fraoch A Ronaigh,” followed by “Thug Mi Gaol Dhut, Thug Mi Gradh Dhut” and “Hi Ho Leagain,” apparently a song about milking a cow. What a voice! And the pitch was a perfect match for the pipes that were very effectively used during the songs. The backing accompaniment and arrangement made this set a show highlight. Lovely.

The band then attacked a set of jigs under the banner “Mabou Jig Set.” Excellent playing and foot-tapping stuff played again at a lively tempo. 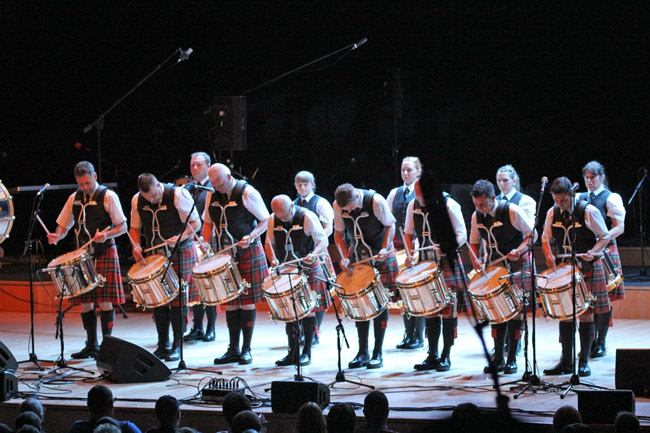 We then had our first solo artist Scott Barrie from Maybole in Ayrshire. What a talent and what fingers. Once Scott was done and dusted on came the drummers to play their fanfare: “Front Row Duck.” Those seated in the front row soon found out what was behind the name. Eric Ward is quite a small man but standing in the middle of this great drum section he had a fair amount of stage presence.

This fanfare had everything and seemed to sate the appetite . . .

See also
Features
Double Gold: a chat with newly-minted Gold Medallists Jamie Forrester and Nick Hudson – Part 1
Features
The Eagle Pipers second-place piob: Iain T. Cameron’s ‘Scots Guards Club, Edinburgh’
Read all in News
Get the Newsletter!
Sign up to receive our most popular stories in your inbox every month.
Thank you, you have successfully subscribed for our newsletter, please check your email
We use cookies on our website to give you the most relevant experience by remembering your preferences and repeat visits. By clicking “Accept All”, you consent to the use of ALL the cookies. However, you may visit "Cookie Policy" to provide a controlled consent.
Cookie PolicyReject AllAccept All
Manage consent