of fellow woodpeckers in the audience. While it had its flashy moments, this is clearly a drum corps at the top of their game playing on instruments that were well pitched.

The evening continued with some Gaelic marches that were very musical. This gave the band time to settle back down on stage and the three drone tuners a chance to do their stuff.

Next up was, as John Wilson described it, was competition corner. The MSR followed by one of the bands medleys. The MSR was “The Ross-shire Volunteers,” “Blair Drummond” and “The Smith of Chilliechaissie.” Great march played at a very relaxed tempo with swing – something you don’t get all that often. This was a great set that should stand the band well at the weekend. I would like another listen though, as the mid-section beatings in the strathspey seemed unusual. As a result I thought the ensemble suffered slightly. Great reel to finish.

The medley was fantastic; well-constructed and the playing across the board was first class. I particularly liked the middle where the band slowed into a very musical and effective air before starting the big finish.

To conclude the first half we had perhaps my highlight of the show, the “Mick MacNeil Set.” Mick is a former member of Simple Minds. The MacNeil family originally hails from the prodigiously musical Hebridean island of Barra (see the connection) and he was initially nurtured on the accordion.

What a terrific arrangement of “Belfast Child” (“She Moved Through the Fair”) and “The Lads of Mull.” I can’t really do it justice here but it’s a track that will have you reaching for the volume control to turn it up. Everything was right about this including the very effective use of the big screen that was at the back of the stage. The base drummer, Niall West, abandoned the big soft fluffy beaters and gave it a bit “large” with some wee sticks. Great stuff and this set us all off into the break, for a refreshment, with a big smile on our faces.

The second half started off with a set of jigs. Boy, can this outfit play jigs. Great musical arrangements with the accompanying instruments. Seat-of-the-pants stuff, and we were back in business.

The next number, “Farley Bridge,” didn’t do much for me. I found it a bit repetitive and it was the first time the pipe chanters’ low G took my attention. Perhaps another couple of hearings may change my mind as the piece was well constructed but on the night not for me. 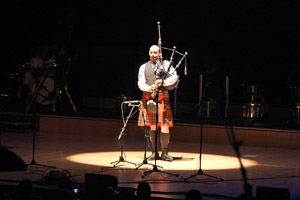 We then had another soloist, Scott Giffin, and he too can move his fingers. What a great young talent. The audience appeared to love the finger gymnastics and it seems par for the course that we are treated to kitchen piping of the highest quality, however, I recall the words of Donald MacLeod at a Piobaireachd Society Conference, when he said to me, “Euan, good pipers can play all that fast stuff and add the doublings, but a great player knows when to leave a gracenote out.” Message received and understood.

We then went into another show highlight, the World War I piece.

The Battle of the Somme, also known as the Somme Offensive, was a battle of the First World War fought by the armies of the British and French empires against the German Empire. It took place between 1 July and 18 November 1916 on both sides of the River Somme in France. The battle was one of the largest of World War I, in which more than 1,000,000 men were wounded or killed, making it one of humanity’s bloodiest battles.

This idea to do this tribute came from Duncan, and his father Donald recorded the moving voiceover at the start when he read “the letter” that was shown on the big screen.

The opening tune, “1914 Letter to His Lover,” was composed by Murdo MacFarlane. This led us into the main body of the piece, “WW1 Waltz,” composed by Duncan Nicholson. It concluded with “An Eala Bhan,” by Domhnall Ruadh Choruna. During the performance . . .