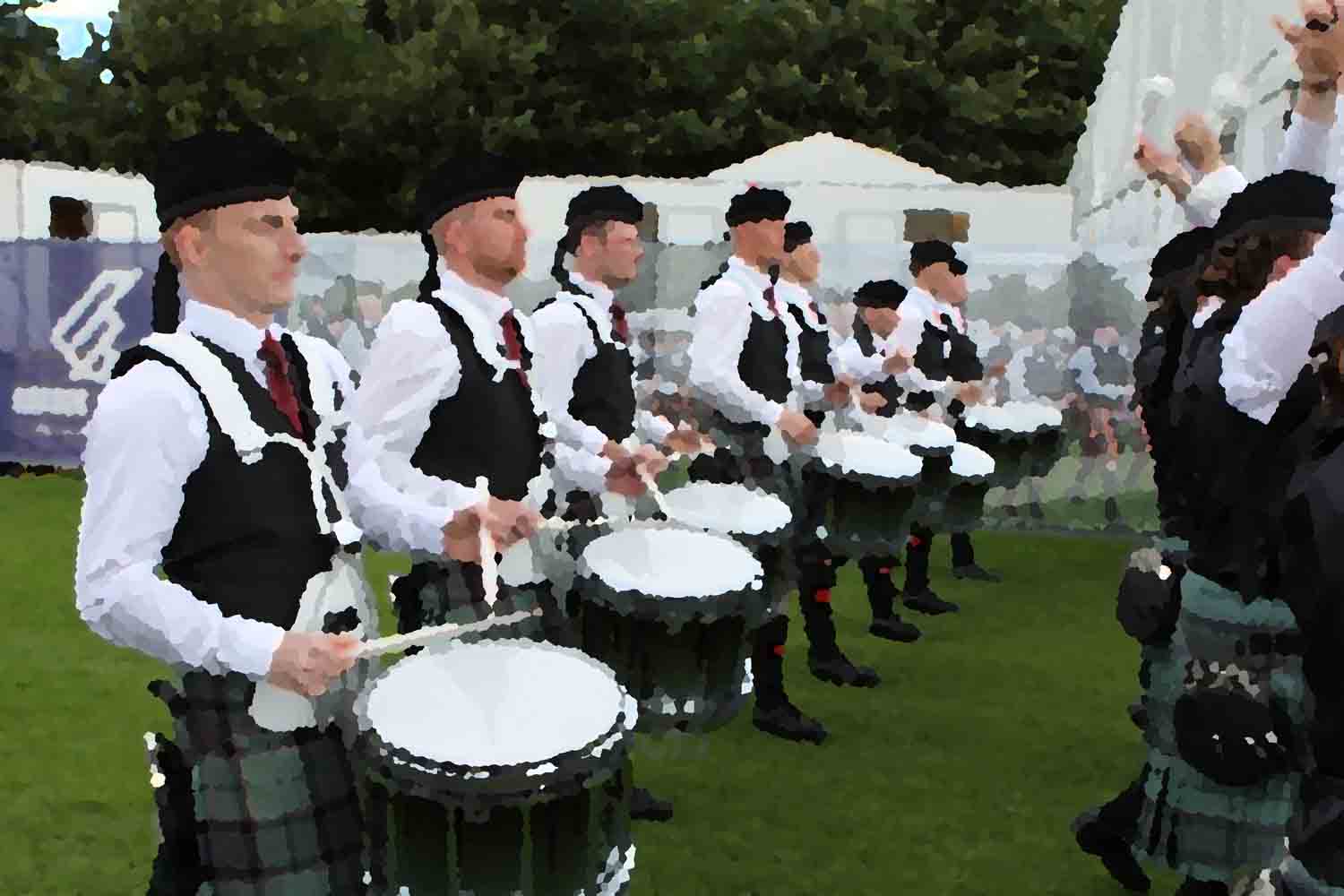 The struggle to find lead-drummers is real, especially at the top levels. A contributing factor is the amount of work that being a modern L-D requires. Composing scores is daunting, and perhaps we expect far too much of our lead-drummers. Imagine requiring a pipe-major to compose entire medleys and MSRs, and then teach every tune to their pipers. Essentially, that’s what is required of a lead-drummer.

While scoring does not have to be 100% original (in that every phrase has to be new), the assembly of the scores is a huge challenge. Borrowing phrases from other scores is common, but the music will always have new twists and tweaks. One size never fits all when it comes to drum scores.

“Judges tend to not comment on material unless it’s way out of what’s expected in the grade,” said one prominent drummer who spoke on condition that his name not be used. “We’re all borrowing from each other all of the time. Nothing is really original at this point, but of course some players write better than others and can make it sound much better than others by their playing ability. I don’t think being original is something that judges favour too much. Sticking with the status quo is more preferable, I’d say.”

Many pipers might be surprised to learn that many snare drummers still learn by rote. That is, by ear and repetition and without music. They do this seemingly because they and many lead-drummers can’t read music, let alone write it down.

The only choice is to learn stroke-by-stroke, and somehow keep it stored in memory. Learning by rote was commonplace in the 1960s, and, while more drummers now write and read music, learning by ear is still relatively commonplace today.

“Most lead-drummers want to write their own stuff because that’s what they know best. Playing other material is done at times but there’s usually a connection back to a corps they played with in the past or a teacher they learned with so the material is very familiar to them.”

For a snare drummer to change bands means having to learn – by rote – a new style and new scores. Even if they joined a section in which the lead-drummer scores the music, they can’t read it. So, they stay put.

Many years ago, Willie Ross standardized many settings of popular pipe tunes. A band would hardly dream of altering “Highland Wedding” in an MSR by any more than a few dots and cuts.

Perhaps it’s time that we begin to standardize snare scores to common tunes? As with pipe tunes, a pipe-major can work to develop a certain style of expression, and so too can lead-drummers. They can still develop a distinctive sound while not having to create all-original scores. But there should be no shame – even at the very top grades – to play scores from elsewhere, even some decades old not written by the legendary likes of, say, Duthart, Kilpatrick or Brown.

Could it be that too many drummers are actually discouraged from learning their art beyond raw execution and technique? There might be a case to be made that, for many lead-drummers and the stability of their sections, ignorance is bliss.

“A lot of people begin in pipe bands by going to a local band, and get free instruction,” Brown said. “This is a blessing and a curse, particularly for drummers. A lot of the time drummers are being ‘taught’ by people who aren’t necessarily great teachers. So basics and fundamentals perhaps aren’t the most important thing to master. Getting on the field is the most important thing. And this is wrong, in my eyes. It contributes to issues later on. But getting on the field is important – because bands lack drummers. It’s an issue of being pushed too quickly, without really, truly, understanding how to be a good player.”

The rushed-to-the-circle syndrome can be seen increasingly in pipers. Whereas novice pipers used to play only the practice chanter for a year or even two, today they are put on the full pipes usually in a matter of a few months. It might keep them engaged, but it perhaps comes at the cost of a solid foundation, and the dreaded problem of pipers and drummers struggling with music beyond their current capability, all for the sake of a band having another warm body to fill out the ranks.

The same seems to be true of many young drummers: pressed onto the field before they are really ready, replete with bad habits and fundamentals lacking.

“Basic skills need to be taught from day one, but we have this idea here that you can learn everything you need inside your band,” our anonymous lead-drummer said. “Leading-drummers don’t help either. They’re desperate for players and don’t want to encourage their drummers to seek help outside of the band for fear of losing them.”