The idea of “style” is common with pipe band drummers. As with pipe-majors, lead-drummers will have their own unique style of playing. Consequently, members of their snare line will have to learn and adhere to that style. For many or most drummers, it can be difficult – or simply too bothersome – to change their style of playing to which they have become accustomed.

“Drummers like to stick with a certain drumming style,” said Blair Brown, one of the world’s best pipe band snare drummers, “which is why they stick with a particular lead-drummer or corps, for so long. I think this is a good thing, for a lot of reasons, but I also think it can be quite limiting. I see it at times as kind of being stuck in a rut.” 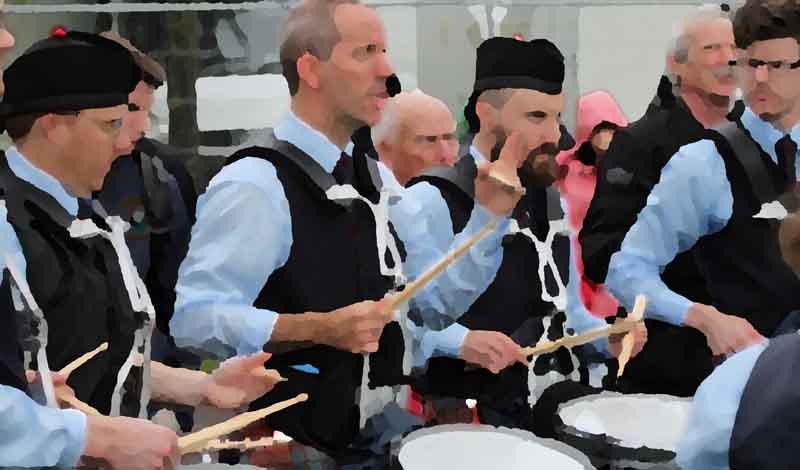 Exposure to different methods, techniques and styles could come down to seeking out tuition, and being allowed to do that. While pipers will routinely get instruction from various sources, with the blessing and encouragement of their pipe-major, pipe band drummers are perhaps too often under the thumb of their lead-drummer. The L-D might feel threatened that a player’s exposure to others could result in their precious player being poached, if the teacher is with a different band.

“I think people should explore, and take lessons . . . to get different perspectives, and always be up front-with your ‘regular’ teacher, that you’re interested in learning so-and-so’s style,” Brown said. “This is where ego and insecurity can come into play. Most lead-drummers that I know seem to feel somewhat threatened that their players will leave. That, to me, is the wrong way to look at it.”

For his part, Brown encourages his players and students to seek out new ways, since it has paid off for him personally over the years. While he was a long-serving member of Jim Kilpatrick’s drum sections at Shotts & Dykehead Caledonia, he eventually looked further afield to enlighten his perspectives.

“The best thing that ever happened for my playing was joining SFU,” he said. “I joined specifically because I wanted to learn, in depth, [Lead-Drummer Reid Maxwell’s] style. It is so different to [Jim] Kilpatrick’s. And I needed to branch out, and dig into a different style. It significantly altered how I think about music. I love both styles. My style will always be more ‘Kilpatrick’ leaning, but playing and learning under Reid made a huge impact on my playing, moving forward.

Others will certainly be comfortable with one style, one band, one lead-drummer, but the there are risks within a band in taking that approach.

“I could have never taken lessons from Reid while playing under Jim,” Brown said. “That would never happen, and that goes for any top grade player or corps – and it trickles down the grades. It’s the wrong way to think.”

As with all things pipe bands, there are varying perspectives, but it would appear that the frequent sheltered experience, drummers adhering to the certain style of their leader, can result in players not expanding their horizons.

We have remarked before on the fundamental difference in piping and drumming scenes between the UK and the rest of the world. In the UK, competitions are largely split. There are pipe band competitions and there are Highland games with solo piping events. The two infrequently are held on the same day, whereas in Canada, the US and elsewhere, there are solo piping and drumming events in the morning and band events in the afternoon.

But, in all regions, many or even most pipe-majors and lead-drummers don’t encourage their players to pursue solo events. Even though they might become better players, and thus improve their bands, drummers especially are often even restricted to concentrating solely on their band work.

“Perhaps solos aren’t taken seriously enough by drummers and some teachers,” Brown said. “I think solos are a must, since they make you a better player for you, and in turn, a better player for your band. But . . . a lot of lead drummers kind of don’t care if their players play solos. They care when they do well, but not a lot are really putting in the work to help them get to the next level with their solo playing.”

Some drummers might want to play in solo events, but finding an accompanying piper can be a problem. Pipers should understand that, when their fellow-member snare drummer competes, it makes the band better. It’s important to step up together for the band.

Playing and competing in solo situations can enhance a snare drummer’s abilities, plus give them confidence to show their musical chops. They practice more. They consider style preferences of judges. Pipers should appreciate that what they’re doing helps their band.