But being a lead-drummer requires a lot more than being a technically good player. The role requires leadership skills, and the ability to work with and motivate people, most of all the pipe-major. Drummers (and pipers, of course) are not taught the skills or given the coaching to be leaders, to build teams, and to work with others. If they’re lucky, they might learn by example, but all too often a newly appointed leader will come into his or her role with a misguided sense of what leadership entails. And they fail. 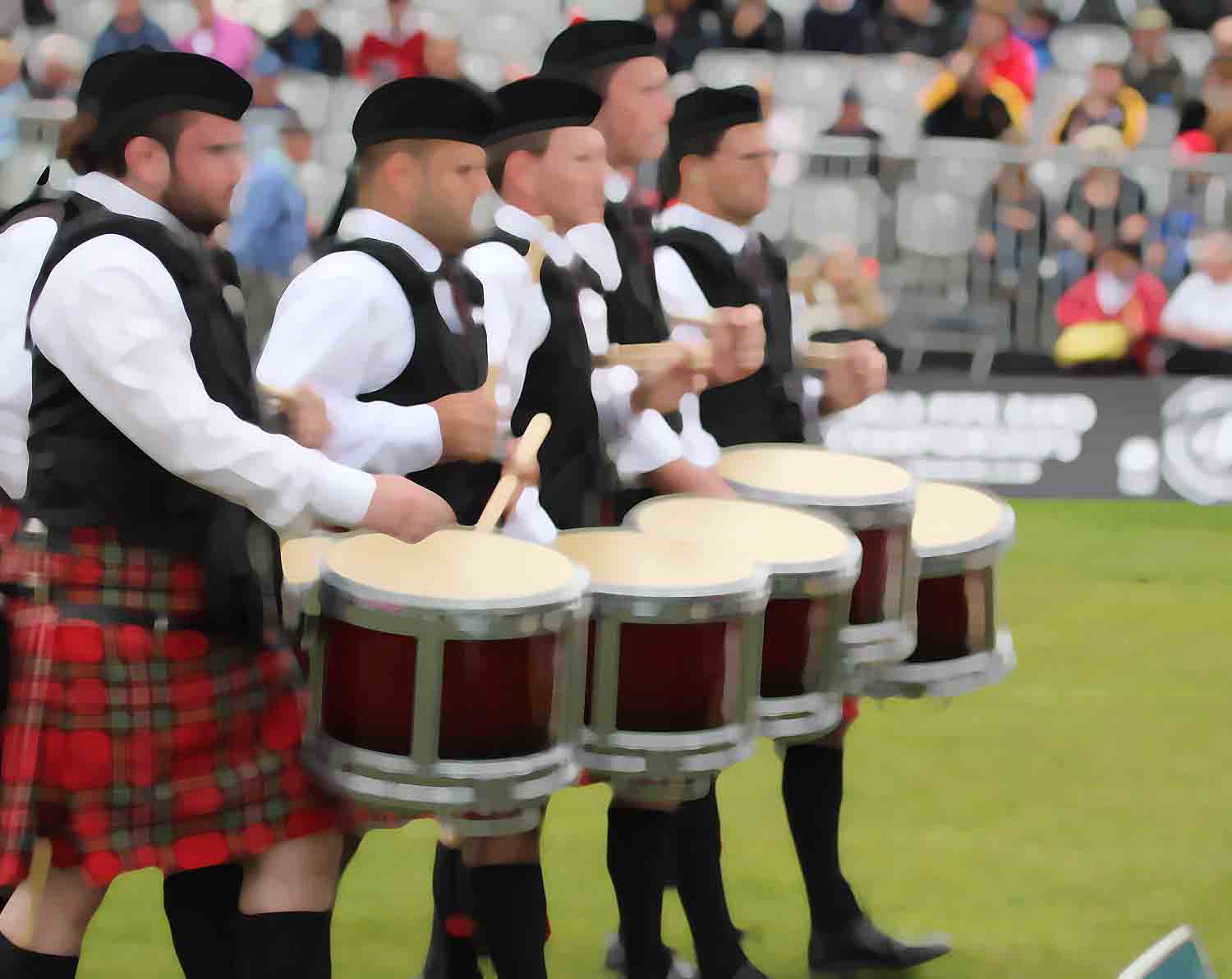 “The main reason is lack of education,” said an anonymous drummer who has led Grade 1 sections. “Most players are not competent at reading and writing because they haven’t taken formal lessons. Drummers [in North America] tend to learn in bits and pieces from various lead-drummers along the way. Only a few make it to Grade 1, and they struggle each year to play because it’s so difficult and time consuming to learn the music by rote. As a result, they only stay in Grade 1 for so long before quitting or moving down a grade to make it easier.

“The problem compounds itself: no education means you won’t be a lead-drummer, or a teacher, and as a corps player you can get by, but it’s hard work each year.”

Being a lead-drummer is probably twice the work of a pipe-major. Lead-drummers pretty much have to look after every drum. They have to tune every instrument. They have to teach or at least coach every player.

“When it comes to lead-drummers . . . I don’t think there’s a lot of great training,” Brown said. “That falls on players themselves, but it’s not like there’s a training program to help facilitate it. There isn’t in a pipe section, either. But it almost seems a bit different. Like you can see certain pipers being groomed to become pipe-majors. That doesn’t really happen in drum sections. And again, some of it could be down to the fact that the lead-drummer doesn’t want to lose good players, or that they don’t want to feel threatened to lose their own spot.”

A pipe band, by its nature, comprises individuals, each with unique personalities and backgrounds. Working with them effectively is a requirement of the job, and, in many ways, it is a job.

But in a “real” job, management of people would never be given to someone with no preparation. An employee would begin with one direct report and, if successful, another would be added, with suitable training along the way. Pipe bands are not professions, but they should still operate with many of the same tenets of a well-run business.

Pipe bands often expect very young and inexperienced players to be leaders, wanting them to manage all manner of individuals and produce competition success. Some talented players — especially young ones — are doomed from the start.

“Being a leader is also a really tough job,” Brown said. “It’s adult babysitting. I don’t mean that in a derogatory way, but it’s dealing with 18 different personalities and schedules. I think a lot of people just don’t want that responsibility.”

The fact that a pipe band has to go outside of the organization to search for a successor to a departing leader points directly to a lack of a succession plan. Every good business grooms successors. It is simply smart for everyone.

But most pipe bands don’t think this way, perhaps because the organization and its sections are run by the leaders themselves, who might not want the risk a player taking his/her leadership skills to another band, or feeling threatened in their own role. It’s small-minded, and some pipe-majors and lead-drummers have an almost Machiavellian personality streak: they secretly want the whole thing to crumble if indispensable them ever leaves.

We actually see that all the time. Bands collapse or even disintegrate when the P-M or L-D leaves.

“You see all of these bands that have vacancy for a lead-drummer,” Brown wondered, “but why is there a vacancy?”

So, what are possible solutions to the age-old traditional scarcity of snare drummers and lead-drummers?

Every post-season begins a search by too many bands to recruit snare drummers and lead-drummers. It’s an unfortunate pipe band tradition.

Their searches can go on and on, and, in an ever-increasing number of instances, they give up the search, and they also give up the band.

You might not agree with all or even any of the premises put forward here. But only by asking questions and seeking solutions will we eventually put an end to these problems, which are as old as pipe bands themselves.

What do you think? Please use our comments tool following to express your opinion!