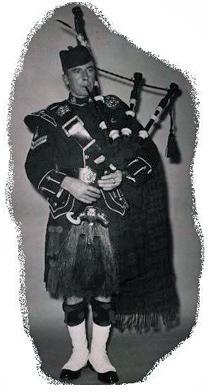 Known worldwide today as the namesake of the Amateur Invitational Solo Piping Competition held annually in Hamilton, Ontario, George Sherriff’s mark was not so much for his playing and competitive achievements as for his contributions to teaching. Indeed, he would provide solid tuition from scratch and usually for free to dozens of young of beginner pipers in the Hamilton area, many of whom would go on to enjoy long careers with area bands. He immigrated to Canada in 1947 from Glasgow, where he was a product of the Boys Brigade system, going on to be a member of, among others, the Grade 1 Clan MacRae Pipe Band. In canada he was a member of the Dofasco Pipe Band, and later joined the Argyll & Sutherland Highlanders of Canada under Pipe-Major John Wilson, where he was pipe-sergeant until 1967. For his singular commitment to teaching, George Sherriff features in our list of the 15 Greatest Canadian Pipers and Drummers (deceased).

See also
News
RSPBA attempts to level the Grade 1 playing field . . . with MSRs
News
Piping and drumming excellence on full display as Queen Elizabeth II laid to rest
Read all in News
Get the Newsletter!
Sign up to receive our most popular stories in your inbox every month.
Thank you, you have successfully subscribed for our newsletter, please check your email
We use cookies on our website to give you the most relevant experience by remembering your preferences and repeat visits. By clicking “Accept All”, you consent to the use of ALL the cookies. However, you may visit "Cookie Policy" to provide a controlled consent.
Cookie PolicyReject AllAccept All
Manage consent