We continue our tribute to the contribution of pipers and piping in the First World War, as we approach the one-hundredth anniversary of the end of the conflict on November 11.

Here we include more reports from the archives of the Oban Times. Of particular interest is a small story regarding the great piper Robert Meldrum‘s original creation of his excellent 2/4 march, originally titled in 1914 as “The March of the Highland Brigade at Mons,” but subsequently published in 1925 as “The Highland Heroes of Mons.”

The composition makes its only print appearance in Logan’s Collection of Highland Bagpipe Music, Book 8, published in 1925. The tune is now in the public domain, as Meldrum died in 1941, and it is now more than 70 years after his death.

Robert Meldrum (1851-1941) was a celebrated, highly-decorated piper. Readers can find a fine biographical piece on him at Jim McGillivray’s PipeTunes.ca. (Be sure to check out his newly designed McGillivray Piping site, too.) The Oban Times report on his new composition is an indication the Great War prompted, in many ways, a golden age of Highland piping light music composition.

Logan & Co. was an early print publisher of bagpipe music, and Scottish music in general. The report on Meldrum’s composition tells how the company proudly displayed his new tune in the front window of their shop, perhaps as much to show their own patriotism as to show off a new musical find.

In 1914, displaying a new tune in a window was the nearest equivalent to posting a composition on Facebook, although the only way to copy the copyright shop window piece would be to transcribe it by long-hand.

The Battle of Mons was the first action that involved British forces in World War I. Though outnumbered by the German forces 3:1, it was a significant victory for the British, and rallied optimism that the overall conflict would be solved shortly. There were 1,638 British casualties or deaths. Though significant, the number would prove tiny compared with future battles at the Dardanelles, the Somme and Passchendaele, to name but a few.

We also include here more reports of the gallantry of soldiers from the Hebrides. The sparsely-populated Western Isles provided a disproportionate number of recruits for the Great War and, consequently, suffered massive blows to the islands’ population when many native sons would never return alive, whether from wounds or disease.

+ Chanters silenced – a pupil of John MacColl, heroes of Oban

We hope that you appreciate these remembrances of the contributions that pipers and piping made to the war effort. The series is not intended to glorify war, but simply pay respect to the profound impact the event had on our art.

THE HIGHLAND BRIGADE AT MONS.

Pipe-Major Robert Meldrum, piper at Drummond Castle, has rejoined the 3rd Cameron Highlanders and left on Friday, 2nd inst., for the depot. It is twenty-two years since Pipe-Major Meldrum left the Army, but his patriotism is as strong as his piping, and those who know him have little doubt but that his playing of the pipes will inspire his comrades to even greater deeds of valour than they have already achieved at Mons.

A letter from Logan, of Inverness, the famous publishers of Highland Music, shows how very highly they esteem the “March of the Highland Brigade at Mons.” Here is what they say: –

Dear Sir, – Excuse the delay in replying to yours of 24th inst., enclosing a copy of your March, “Highland Brigade at Mons.” It is a first-class tune, and has been greatly appreciated by those who had the pleasure of playing it.

At present we have it exhibited in our window, and it has attracted a great deal of attention.

We thoroughly appreciate your kindness in sending it to us, and we will be very pleased indeed to give it a place in our collection. – We are, Dear Sir, Your obedient servants, 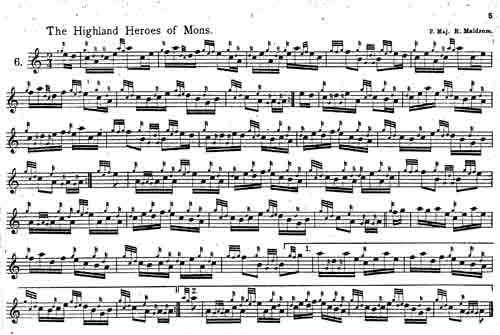 Piper H. MacLellan, 1/4th Seaforth Highlanders, was wounded on the 11th March at Neuve Chapelle, in the terrible and splendid charge, where the Seaforths won undying fame. He was in hospital for some time, but we are glad to report that he has now returned to duty.

It is with the deepest regret that the parish learned of the sudden death of Piper Donald Gillies, of the 2/6th Black Watch, after a very short illness. He was buried with full military honours in Dundee. The Pipe Band of the Battalion played impressive music, and the firing party, buglers and guard of honour were also present from his Battalion. 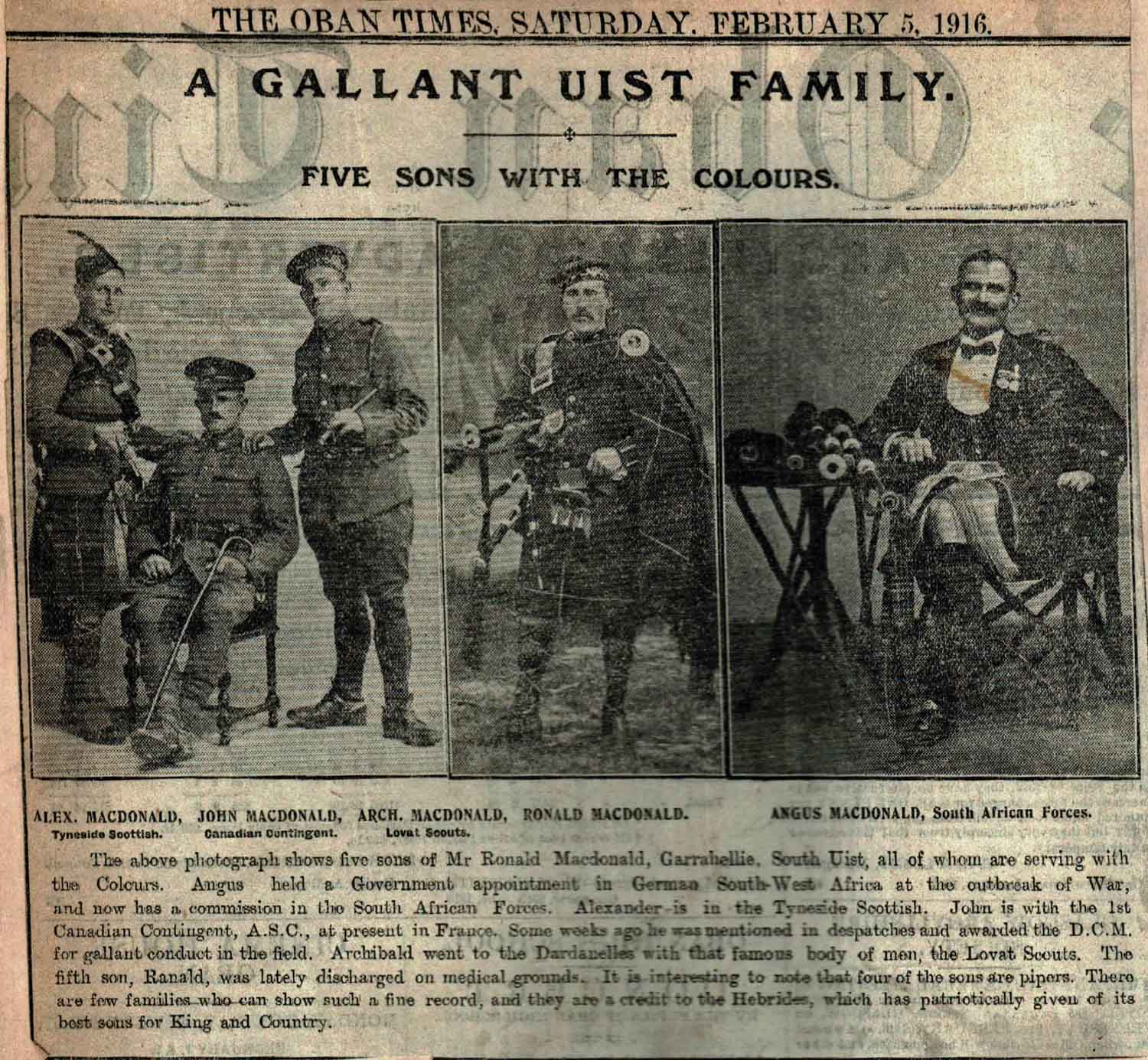 FIVE SONS WITH THE COLOURS.

The above photograph show five sons of Mr Ronald Macdonald, Garrahellie, South Uist, all of whom are serving with the Colours. Angus held a Government appointment in German South-West Africa at the outbreak of the War, and now has a commission in the South African Forces. Alexander is in the Tyneside Scottish. John is with the 1st Canadian Contingent, A.S.C., at present in France. Some weeks ago he was mentioned in despatches and awarded the D.C.M. for gallant conduct in the field. Archibald went to the Dardanelles with that famous body of men, the Lovat Scouts. The fifth s

on, Ranald, was lately discharged on medical grounds. It is interesting to note that four of the sons are pipers. There are few families who can show such a fine record, and they are a credit to the Hebrides, which has patriotically given of its best sons for King and Country.

And, finally, the sad loss of a highly decorated young piper, pictured in the Oban Times with a chest festooned with medals. Eight years in the military, and dying at age 23, he would have been 15 when he somehow joined in peace-time. As usual with reports of the time, gallantry is the central message, and details of how a soldier succumbed to wounds are omitted unless they depict a story of heroism, sacrifice and courage.

DEATH OF A NOTED HIGHLAND PIPER.

Some time ago Mr and Mrs Ramage, 10 Springfield Lane, Glasgow, were officially informed by the War Office that their son, Piper Archibald MacPhie Ramage, Scottish Rifles, was posted missing after the big engagement at the Dardanelles on 28th June last, in which the Scottish Rifles played such a gallant part at a great sacrifice. Recently they have been notified by the War Office that it is now believed he was killed on that memorable day.

Piper Ramage was 23 years of age, and he had been connected with the battalion for the past eight years. Prior to the outbreak of the War, he was employed at Manchester. He was a genial young man and a gifted piper, having won a number of cups and medals in the keenest competitions and under competent judges.

All lovers of the great Highland bagpipe will mourn the loss of such a promising young man, cut down in the prime of life, and much sympathy is extended to his sorrowing parents and friends.

Stay tuned to pipes|drums for more archive pieces on pipers and the Great War.