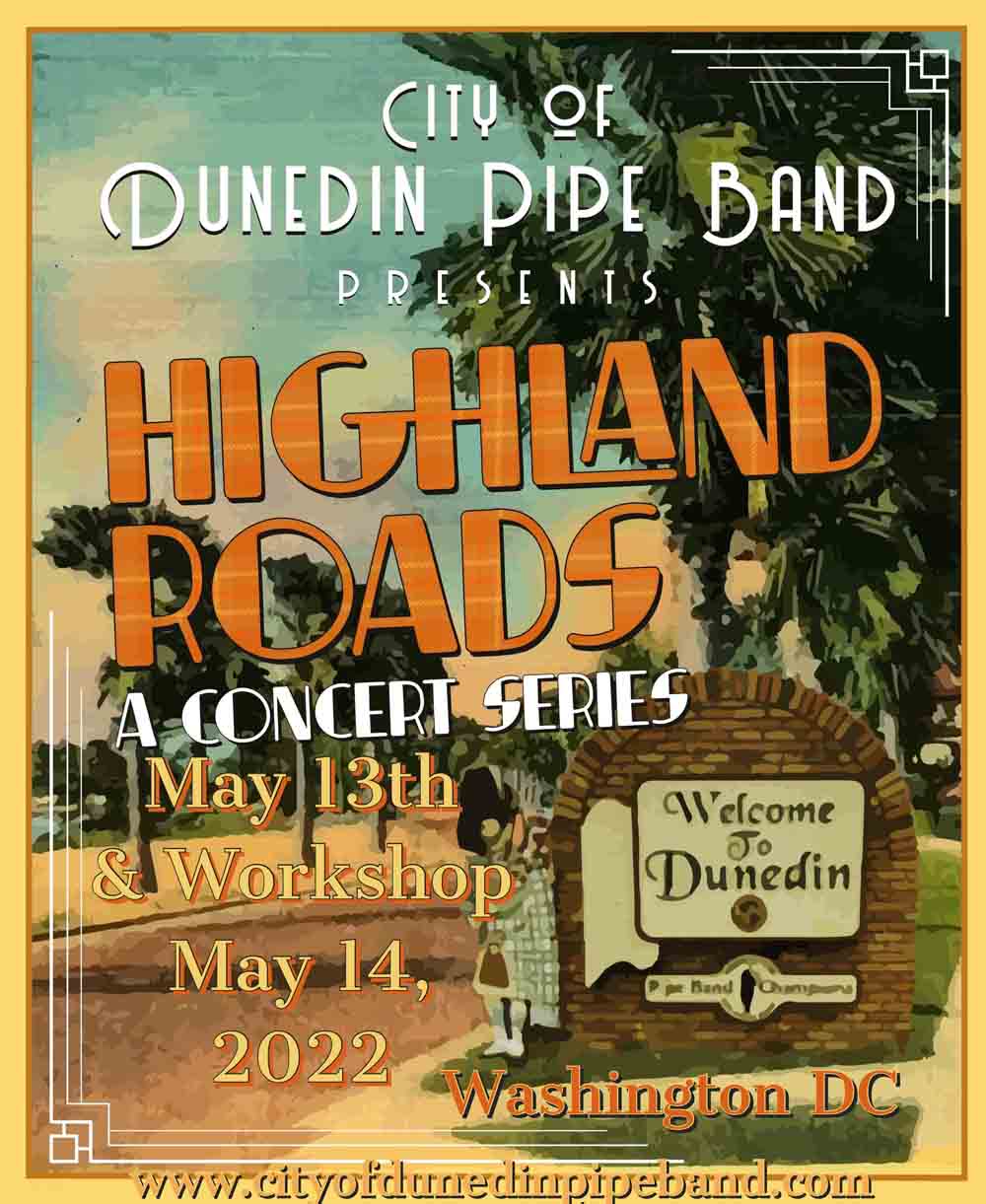 Florida’s Grade 1 City of Dunedin Pipe Band has postponed its “Highland Roads” concert and workshop in the Washington, DC area to May 13-14 due to current COVID-19 restrictions.

The events were originally slated for February 5th, but the latest Omicron rendition of the coronavirus and its impact on air travel and larger gatherings necessitated the move, the show still at the Rachel M. Schlesinger Concert Hall and Performing Arts Center in Alexandria, Virginia, with proceeds going to the FireFighter Cancer Foundation.

“With all of the COVID developments in the DC area currently, and all of the related impacts to travel, it became clear that a reschedule was the way to go,” said band spokesperson and lead-drummer Eric MacNeill. “It was challenging to find a date that worked with the venue and other Highland games in the region this spring, but I think we’ve locked in the perfect dates.”

Tickets remain US$24.50 for the concert and US$75 for the workshop, plus a t-shirt valued at US$20 can be purchased now from the band’s website, and a discount (US$99.99) is available if purchased together. Enthusiasts can also donate to the FireFighter Cancer Foundation on the site.

With all of the COVID developments in the DC area currently, and all of the related impacts to travel, it became clear that a reschedule was the way to go. – Eric MacNeill, City of Dunedin

MacNeill added that all five of the bands in the City of Dunedin organization have continued to hold in-person practices within Florida’s pandemic guidelines.

The Central Florida Highland Games in the Orlando area are going ahead over the January 15th weekend, with four of the Dunedin bands entered, and 10 bands total slated to compete at the games –seven in Grade 5 and three Grade 4. There is no Grade 1 contest. The City of Dunedin Grade 4 band competed at the Jacksonville, Florida, games in February 2021, but it will be the first contest in two years for the other three bands.

Like Closkelt of Northern Ireland and Houston’s St. Thomas Alumni, City of Dunedin have so far waited two seasons to make their Grade 1 debut at the World Championships after being formally upgraded by the Royal Scottish Pipe Band Association after the 2019 season. City of Dunedin had been elevated to the top grade by the Eastern United States Pipe Band Association after the 2018 competition season, winning Grade 1 at the 2019 North American Pipe Band Championships at the Glengarry Highland Games at Maxville, Ontario. The band did not compete at the 2019 World’s.