in the tunes he or she has written, though in most countries publisher are not allowed to take more than 50 percent of the royalties.

To protect your copyright online, it’s a good idea to place the copyright notice (i.e., “© Your Name, the year”) on all of your tunes, so that potential users know that you’re the one who wrote them, and you’re the one who holds the rights to them. Other than that, it’s up to you to watch for any proof that someone is using one of your tunes without your permission, which is called infringing on your rights. If that happens, you can request that the infringer stops using your tune, or even take legal action. As yet, there’s no policing mechanism over protecting copyright online.

If your tune is performed in public (live, radio, TV, etc.) in another country, as long as your composition is registered with your performing rights organization, and the tune is accurately listed in proper reporting by the station or performance venue, you will receive the royalties that you have rightfully and legally earned.

For example, just one play of your tune on the BBC in the UK could mean hundreds of pounds in your sporran – provided 1) you are a member (free to join) of a performing rights society, 2) you have registered the composition with the organization, 3) the name of the tune is accurately reported by the BBC.

You can and should help yourself. Simply send your performing rights organization a note alerting them to where you know your tune was performed, e.g., “Smith’s Welcome to Royalties,” World Pipe Band Championships broadcast, BBC Scotland, August 16, 2015. 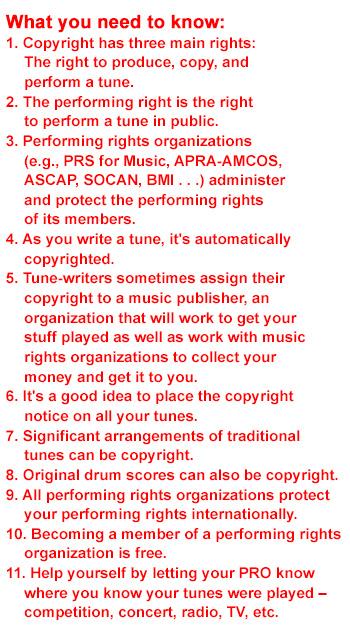 Even if it’s a year or two or 10 or whatever years ago, you can and should still report where your music was performed in public. Performing rights organizations will either have your money sitting there waiting to be matched with the owner, or if there is no record of the event and no license paid for it, they will investigate, and eventually you will get the money that you have earned through your composing skills.

Unclaimed money is “orphan” money that goes in to a big pot that, and if unclaimed after, say, a decade, it is released for general distribution, probably to those who are most played on the radio – that is, NOT to you.

Performing rights organizations do not want to keep your money. They want to get it to those who have rightfully earned it: you, the composer.

Royalties legally and rightfully paid to you, the composer, do not cost radio stations, networks, or pipe band competitions any more than they already pay in licensing. Each by law is required to pay music licenses, and royalties come from the licenses they pay.

Highland games and pipe band competitions – anywhere where music is performed in public – are required to pay a license for live music, unless special dispensation is given, such as charitable status. For a large competition that attracts a paying public of, say, 10,000, that . . .