With all the gear and gizmos of today, could these great bands of the 1970s stand up against the best of the 2020s?

That’s just one of the questions we asked of Clan MacFarlane Pipe-Major Ken Eller, Triumph Street Pipe-Major Hal Senyk, and City of Victoria Pipe-Major Jamie Troy, as we conclude our three-part video interview with these legends.

In Part 1, Eller, Senyk and Troy looked back at the conditions of the times, their respect for each other’s bands in a pre-internet era, and their consciousness, or lack of it, of doing something historically important.

In Part 2, the group delved into the bands that inspired them 40-50 years ago, the bands of today that might be a model to emulate, and, through the benefit of hindsight, what they might do differently today. They discuss the essential roles that lead-drummers John Fisher, John Kirkwood and Willie McErlean played for City of Victoria, Clan MacFarlane and Triumph Street, respectively.

The demise of each band, greatest achievements, and the respect and dignity that was the tenor of the times . . . all in an excellent Part 3.

In addition to our video interview, here’s a gallery of images of the bands or pipe-majors: 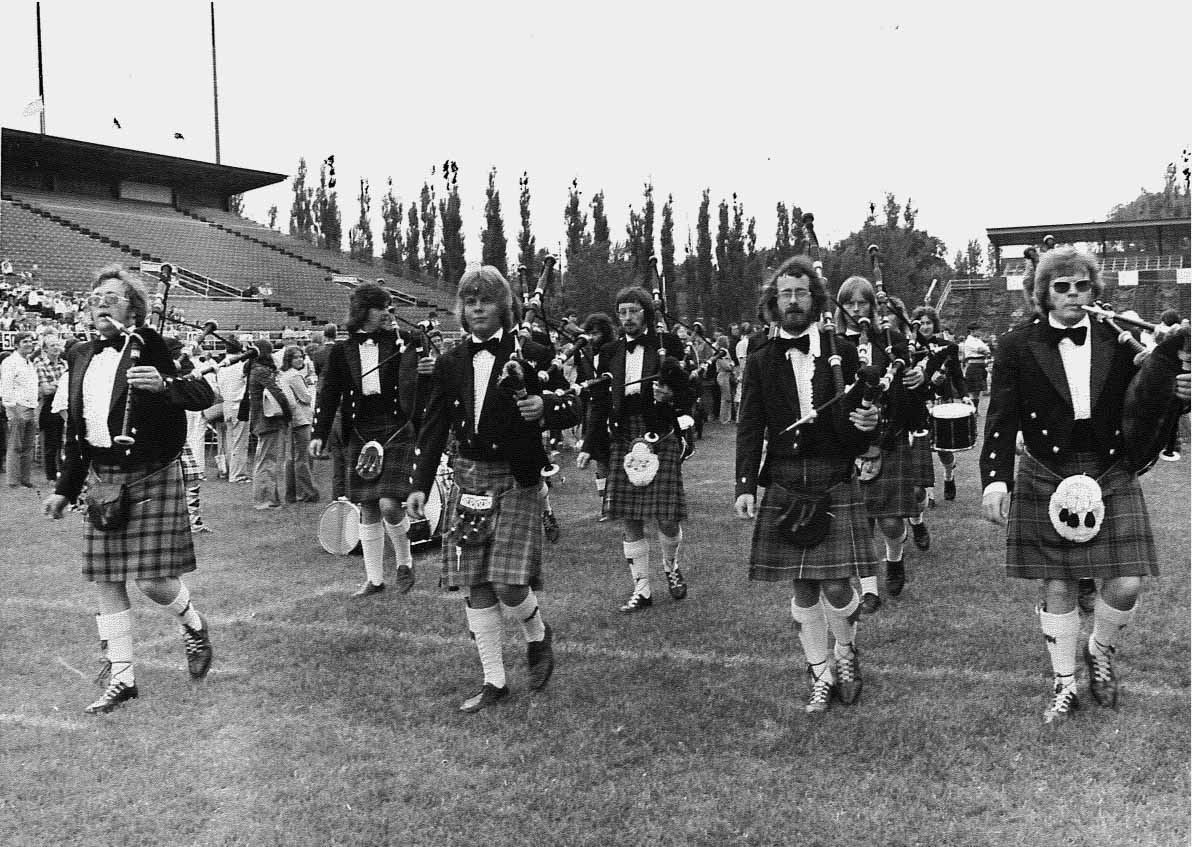 Ken Eller was pipe-major of St. Catharines, Ontario-based Clan MacFarlane for more than 20 years. Beginning in the 1960s and continuing until the mid-1980s, Eller guided “The Clan” to a raft of North American Championship titles, creating a trademark

and legendary big sound to rival anything on earth. Surrounded by a stalwart and committed group of players, including pipers like Bob MacCrimmon, Scott MacAulay, Peter MacKenzie, Ron Rollo, Dave Goodall, and drummers such as John Kirkwood, Bob Downs, Douglas Kirkwood, and Andy Miller, the club-like Clan MacFarlane stayed together and, most importantly, played together – in every sense of the word. Ken Eller – affectionately nicknamed “The Captain” by his players – was the glue that held the Clan together through his charisma, charm and outright skill. A lifelong student of pipe bands and piping, he has continued his big presence in the pipe band world as a teacher, judge and popular host and commentator for myriad concerts, recitals and broadcasts. His “Captain’s Corner” website has been a popular resource since the earliest days of the internet. Now 75, but with the his mental agility and charisma as sharp as ever, he enters his final year of eligibility as an RSPBA adjudicator (due to the organization’s age limit rule), and is as in-demand as ever for judging and teaching around the world.

The pipe-major of the original rendition of Triumph Street of Vancouver, Hal Senyk helped to form the historically successful band in the early 1970s. Named for an actual street in the British Columbia city, Triumph Street began as a bare-bones ensemble, competing in the highest without matching kilts or even bagcovers, many of the band’s members sporting long beards and mustaches, reflecting the look of the disco ’70s. Triumph Street also shook up the pipe band world by being the first top band to have not just one or two, but several women in its ranks, proving that playing excellence at the top level has nothing to do with gender. As a student of the great Muirhead & Sons Pipe-Major Bob Hardie, and a member of his band for a time, Hal Senyk learned from the master and applied it to Triumph Street’s emphasis on musicality and ensemble. The band, still only a few years old, travelled to Scotland in 1976 and placed fourth at the European Championships and, returning to the UK in 1979, placed fifth and won the drumming at the World Championships in Nottingham, England, helping to change the course of history forever, proving that it was possible to actually get the nod not just for a prize, but for a first prize, from RSPBA judges. Hal Senyk has continued to be a major contributor to piping, teaching numerous bands and individuals, competing here and there with other groups, all while holding down a successful career as a lawyer, which he still enjoys today, from his home in New Westminster, British Columbia.

As with Ken Eller and Hal Senyk, Jamie Troy is a true pipe band legend and a towering figure in pipe band history. As the pipe-major of City of Victoria of Victoria, British Columbia, Troy spearheaded the most musically innovative bands of the 1970s. Surrounded by superbly talented and creative pipers like Colin Magee, Bruce Gandy, Steve Geddes, Peter Aumonier, and a crazily-talented Alex Duthart disciple in Lead-Drummer John Fisher, “Victoria” was one of the first bands to harness new music and arrangements from its players. While Troy was clearly the leader, he had the confidence and intelligence to go deeper, producing original music from within. Indeed, two of his pipers, Terry and Jack Lee would go on to huge things, chief among them six World Championship wins, with Simon Fraser University. City of Victoria has the distinction of being known as “the best band not to win the World’s,” when by all accounts – including history-making pipe-majors like Iain McLeod of the Edinburgh City Police – the band deserved to win the title outright in 1979 at Nottingham where they were finished sixth. Retiring from the pipe-majorship in the 1980s, Troy has been a sought-after teacher and judge and, after he acquired in the early 1990s the noteworthy McAllister Reedmakers (created by fellow pipe band legends John K. and Tom McAllister, he and his son, James P. Troy – an extraordinary piping and snare drumming talent) has been creating some of the world’s best pipe chanter reeds at Troy Reedmakers.

Our thanks to Ken Eller, Hal Senyk and Jamie Troy for taking the time to speak with our thousands of readers worldwide.