Enjoying the pleasures of pipes past

David Glen was one of the great pipe music compilers and one of the most prolific pipe-makers ever. He inherited the Glen pipemaking firm from his father Alexander, who began making instruments in 1834. The two worked together beginning in 1868, and David took the firm over when his father died in 1873.

Alexander Glen pipes are not easily identified unless they sport a stamp. Both “A GLEN” and “ALEXr. GLEN/EDINh” have been seen. His earlier pipes don’t conform to the later Glen/Edinburgh tradition, though it appears he evolved the look his son adopted and carried forward for nearly 30 years, so it’s possible that many suspected David Glen pipes were made by his father. David Glen pipes were often made in a lovely reddish-brown cocuswood with button mounts and are characterized most frequently as “mellow,” which means, in fact, “quiet.” They can be rich, buzzy and remarkably steady, but do not 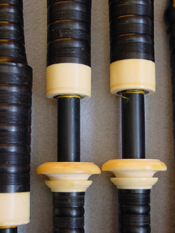 find favour among top soloists, who prefer the fuller Henderson/Lawrie sound. The firm of David Glen & Sons carried on long after David’s death in 1916, finally closing up shop in 1949. They made a huge number of sets over nearly a century and a half. The craftsmanship of Glen pipes during the era of David and his father Alexander was almost without parallel.

The firm of David Glen should not be confused with the firm of J & R Glen, which ran from the 1830s until around 1980, also in Edinburgh, and was another branch of the same family. This Glen firm was also prolific. The early sets made by Thomas MacBean Glen are considerable rarer than his brother Alexander’s and highly prized, but difficult to identify. His sons John and Robert (J & R) carried the business into the 1900s. The firm bought the remains of the David Glen stock when David Glen Jr. retired in 1949.

John Center was an Edinburgh contemporary of David Glen. Examples of John Center pipes are fewer in number, but the quality of their tone and craftsmanship equals or even exceeds the greatest Glen or MacDougall pipes. Center favoured cocuswood as his prime material, though he worked in ebony as well. The tone of his pipes is similar to MacDougall – remarkably rich and steady, and fuller than Glen’s. The family moved to Melbourne, Australia in 1908 and continued to make pipes there. John died shortly thereafter, and his pipemaking son James – a leading player and the subject of the great Willie Ross jig “Center’s Bonnet” – died young of the Spanish flu in 1917 during the worldwide outbreak. A great set of Center pipes is a real find, but uncommon.

James Robertson was an Edinburgh resident whose pipes did not conform to the visual style of other Edinburgh makers. They are characterized more than anything else by massive ivory projecting mounts turned in a sort of mushroom stye, thicker sticks, and a big, steady drone sound. He was a remarkably consistent maker who was meticulous in his materials selection and turning. His pipes are superb: quite full, easy to reed and still widely available. Perhaps no other maker’s pipes are so visually distinctive and consistent. They can be very difficult to date as a result. He was a prolific user of casein imitation ivory and engraved Sterling silver.