pipe bands around the world that are almost invariably led by men, we must ask ourselves how we can claim we have arrived at a state of gender equality, simply because we can point to the advances of some women today, relative to the state of inequality in the 1970s.

For women like me who have spent decades of their lives playing in pipe bands, we can all point to the ways in which gender discrimination has affected us, both big and small. There are the micro-aggressions, like the derogatory terminologies we use to describe unfavourable practices, in gendered terms. We say “He plays a girl’s reed” when we intend to demean someone for playing an easy set of pipes; we say someone “blows like a girl” when we are referring to blowing unsteadily; we say someone “hits the drum like a girl” when we are suggesting they play timidly. Of course, it may often be the case that the physicality of piping and drumming means there will be variation (and to some extent gender-based variation) in the strength with which we approach our instruments.

But long gone are the days where one’s ability to play a gut-busting reed was a necessary sign of quality – let alone the days where it represented some kind of normative masculinity – and some of the best pipers these days, male and female alike, play easy sets of pipes. The extent to which women are bothered by micro-aggressions might vary and, for many, such colloquialisms have hardly any bearing on an overall pipe band experience that is nothing short of enjoyable. For others, however, these small things, coupled with bigger things, such as the demeaning and often sexualized behaviour they’ve experienced from male peers, leaders, and judges, make it much less enjoyable to participate.

The #metoo campaign tells us a lot about the ways in which women’s experiences of violence are silenced in male spaces. Whether it’s micro-aggressions, discrimination, a persisting gap in gender parity, or sexual harassment and physical and sexual assault, when it happens, this kind of abuse plays a devastatingly sinister and pervasive role in how we as women experience our social world. It is absolutely unacceptable that we should have to put up with this. This is true in all aspects of our lives, in both public and private spaces. It is also true in pipe bands, where our ability to participate and glean enjoyment from our hobby is often compromised by gender-based violence and discrimination. 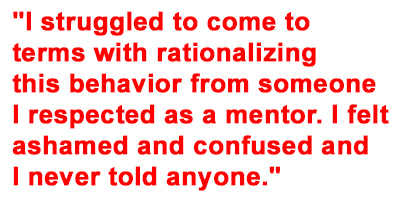 I’ve played in pipe bands for more than 20 years. I was just 14 years old when a prominent pipe band judge – more than four times my age – first gave me alcohol after a competition, and invited me back to his hotel room. I remember the way I felt when I realized that this man’s interest wasn’t in me as a promising young player, and I struggled to come to terms with rationalizing this behaviour from someone I respected as a mentor. I felt ashamed and confused and I never told anyone.

I was 15 when a leader of a Grade 1 band first did the same. I was 16 when I started to make my way into the male spaces of post-competition beer tents and bars. And while I loved the banter and engagement with my band members and competitors, I also experienced the sexual and demeaning ways in which so many men spoke to women, and about them.

By the end of my teenage years in pipe bands, I’d already experienced . . .