The decade was rich with piping and drumming achievements. It was hard to decide the very best of the best, so we assembled a group of 50 accomplished pipers and drummers to allow us to democratically determine the winners.

Opinions will vary. It’s all subjective. Our nominees were chosen from the annual pipes|drums New Year’s Honours winners, plus select others that rated highly.

pipes|drums Product of the Decade 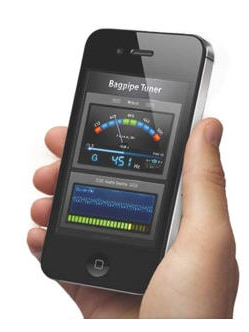 The winner of our survey of the Best Product of the 2010s by 12 percentage points was the Bagpipe Tuner for iPhone by Blair Bagpipes. A clear 38% of respondents chose the product, which was the first tuner app for the pipes, which interestingly still seems to be the go-to tuner app on the market, thus showing the importance of being first in with a good product.

Priced now at $16.99, the Blair Bagpipe Tuner can be seen in action at pretty much every piping and pipe band competition, often used in combination with dedicated handheld tuners.

It’s perhaps not surprising that the Product of the Decade comes from Blair Bagpipes, which finished in a tie for runner-up with the Blair Digital Chanter and the Tone Protector from Jori Chisholm’s growing products business out of Seattle, each with 26% of the vote. Based in Australia, Murray Blair has been innovating for piping for several decades and, along with Geoff Ross, has proven that Australia is the world’s centre of truly new piping products.

The 2010s were punctuated with many digital products, but paradoxically many analog offerings came to the fore. The innovative natural skin zippered pipe bag from Lee & Sons Bagpipes and Bill Livingstone’s hardbound memoir, Preposterous – Tales to Follow, stood on their own as singular contributions to the art.

A few comments from panelists about the Bagpipe Tuner for iPhone by Blair Technologies: 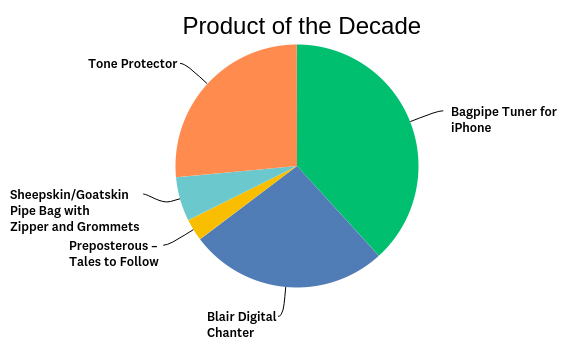 Stay tuned for the pipes|drums Best of the Decade Award winners in the Drummer, Piper and Pipe Band categories, and of course the 18th annual pipes|drums New Year’s Honours to be announced on December 31 – all exclusively for subscribers to pipes|drums!