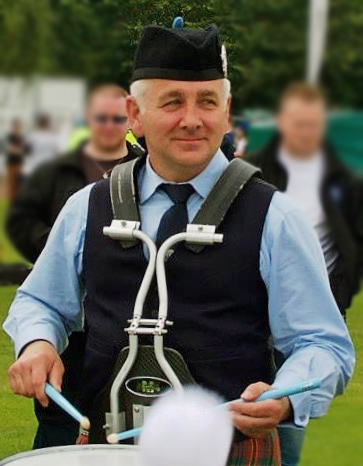 Only three days after the band announced officially that Lee Irwin was no longer running its drum section, the Grade 1 Vale of Atholl of Pitlochry, Scotland, confirmed that Adrian Hoy is the new leading-drummer.

Hoy is the former leading-drummer of the Grade 1 Cullybackey of Northern Ireland, and has a long history with the band. Cullybackey has fallen on hard times in the last few years and was unable to compete as a band in 2016, a victim of the numbers game in the top grades.

Hoy started with Cullybackey at the age of nine and by age 22 was appointed L-D and remained in the role until 1990 when he was a member of the Grade 1 ScottishPower for three years before returning to Northern Ireland, then a Grade 2 band.

Hoy brings to Vale of Atholl “all of his former corps,” which will practice in Northern Ireland and make the commute to Scotland.

Vale of Atholl said that it’s a “natural fit” because of “a close relationship with the two bands.” Vale Pipe-Major Adrian Cramb said that Hoy has given a “long-term commitment” to the band.

Lee Irwin was appointed leading-drummer in January 2016 following a lengthy search, but parted ways with the band in July of this year for health reasons.

The Vale’s move is the latest in what appears to be a growing trend for bands who aren’t one of the current “big five” – comprising Field Marshal Montgomery, Inveraray & District, ScottishPower, Shotts & Dykehead and St. Laurence O’Toole – to develop creative ways to remain competitive, or simply survive in Grade 1.

Vancouver’s Dowco Triumph Street in 2015 announced that it would maintain a group in Scotland, and this fall appointed former World Pipe Band Drumming Champion Gary Corkin of Northern Ireland as leading-drummer.

Other bands, like Denny & Dunipace of Scotland and Ravara of Northern Ireland, have either suspended operations or been severely impacted due to not being able to field numbers that are competitive in Grade 1.

Vale of Atholl’s appointment of Hoy means that the band probably is the first ever to have two people named Adrian as pipe-major and leading-drummer.