We continue our video panel interview with four of the leading lights in pipe music composing, each rising to the top in the last year with new collections and recordings.

All from Scotland, these four have each made the most of the time, converting what could be an overwhelmingly negative situation into positive creativity that will have a lasting place in the piping and drumming world. 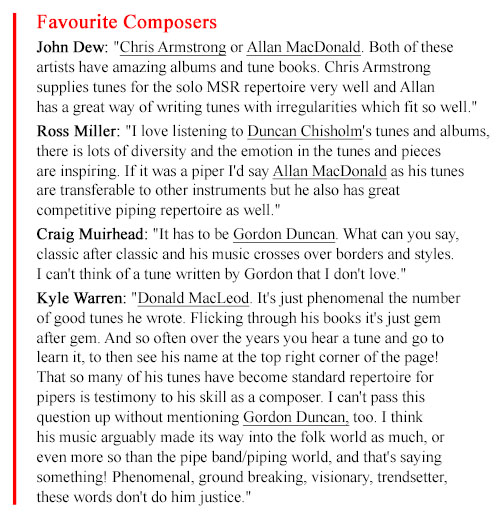 Ross Miller is a member of the reigning World Champions Inveraray & District, as well as a multi-faceted player with the Foot Stompin’ Ceilidh Band. He put out his first full-length recording, The Roke, in 2020,  featuring many of his own compositions. He’s also an accomplished competing solo piper, with a bunch of prizes at significant events. From Linlithgow, at age 25, he’s already established a solid career as a professional piper.

Craig Muirhead is a full-time teacher of piping and the resident tutor at Strathallan School in Perth and lives in Stirling. He has been a piper with Grade 1 ScottishPower and last year published 30 Exactly, his second collection of original compositions. Muirhead has had significant success in solo piping competitions, and knows performance, being a former member of the Red Hot Chilli Pipers collective. Several of his compositions have caught on worldwide, and he’s established a reputation for creating memorable melodic lines.

Glaswegian Kyle Warren last year published his second full collection. Eat.Sleep.Pipe.Repeat. was released to excellent acclaim in 2020. He returned to Scotland last year after five years in Australia, where he was pipe-major of Grade 2 Hawthorn and a piping teacher at Scotch College in Melbourne. A member of Field Marshal Montgomery from 2011-’14, he’s back with the band and also working on his second commercial recording.

Stay tuned for the third and final installment of our panel interview in the next few days.