Andrew Bonar was always young for his age, both in looks and demeanor. When he asked to join the band (then City of Port Moody) in 1980 he was a very young 14 years old. He looked about 10. A wee blonde kid, always laughing and smiling, and a real enthusiast who was excited to be playing. He would bounce around practice learning the tunes faster than anyone, playing them at warp-speed.

In the mid-1980s, Boney was keen on any band project and was all about going to Maxville, Scotland, recording albums, and so on. No challenge was too big for him. I found myself usually offering him a solo spot in concerts knowing full well that he would attack the task and come up with something very different for his sets. He had a unique slant on music and musicality. Certainly, wandering tempos and transposing tunes would be involved. Sometimes it was his compositions, but it was always his slant on the musical statement.

In 1989 when Reid Maxwell came out to judge the BC Pipers’ Association Indoor, the issue of who would pipe for Reid at the recital came forward. It was Bruce Gandy and Michael Grey who suggested Boney as they were confident he would know all the 78th Fraser Highlanders’ sets. Sure enough, Boney slotted right in there without missing a beat. It wasn’t long after that when Boney headed east to NAV CAN in Cornwall, Ontario, for air traffic control training, and he joined the 78th for a couple of seasons. I was happy to see him do that and to excel there.

Andrew’s mind was incredible. He was the “stats” man. He knew judges’ rankings and comments from years earlier and would often remind and us of the most random things. I remember, in 2012, Andrew saying to me the morning of the World’s that this would be my thirtieth time taking the band onto the field at contest. After I said, “Okay, thanks,” he said, “That’s more than anyone else.” “What? Really?! Okay.” I couldn’t believe he knew things like that.  I suppose his photographic memory came in very handy here. The thing is, he knew things about all sorts of different people and events – not just interested in himself. He was a real people person. 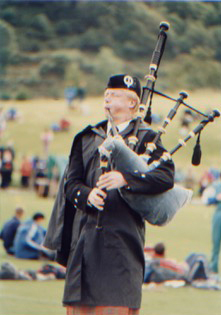 I certainly remember seeing him at more than one practice playing in the circle, when something didn’t look right. I then realized he had his hands reversed: right hand on top. While I wanted so badly to give him a hard time, I just couldn’t. I had seen him doing this with marches, but not usually with entire band sets. Astonishing.

Boney was a serious competitor as well. He was tenacious and determined. This kept him at the top of the class for many years around our circuit. I asked him once how long he was going to continue at it. His answer was, “We’ll see at 50; I’d like to go that long.”

Another clear recollection I have is wandering around the streets of Inverness with the Lees – Jack, Andrew, Alastair and me. It was the 2010 Northern Meeting and Andrew had just won the Silver Medal. I remember there were moments of Andrew randomly skipping down the street and saying to Jack, “Thank you for teaching me that tune.”

One of a kind.

A celebration of Andrew Bonar’s life will be held at 3 pm on October 22nd, in Surrey, British Columbia.

Andrew Bonar had many friends, and if you would like to leave a few memories of him, please feel free to use our comments feature below.

See also
Results
Glengarry Cup MSR goes to Ian K. MacDonald
News
David Bailiff, 1962-2022
Read all in News
Get the Newsletter!
Sign up to receive our most popular stories in your inbox every month.
Thank you, you have successfully subscribed for our newsletter, please check your email
We use cookies on our website to give you the most relevant experience by remembering your preferences and repeat visits. By clicking “Accept All”, you consent to the use of ALL the cookies. However, you may visit "Cookie Policy" to provide a controlled consent.
Cookie PolicyReject AllAccept All
Manage consent