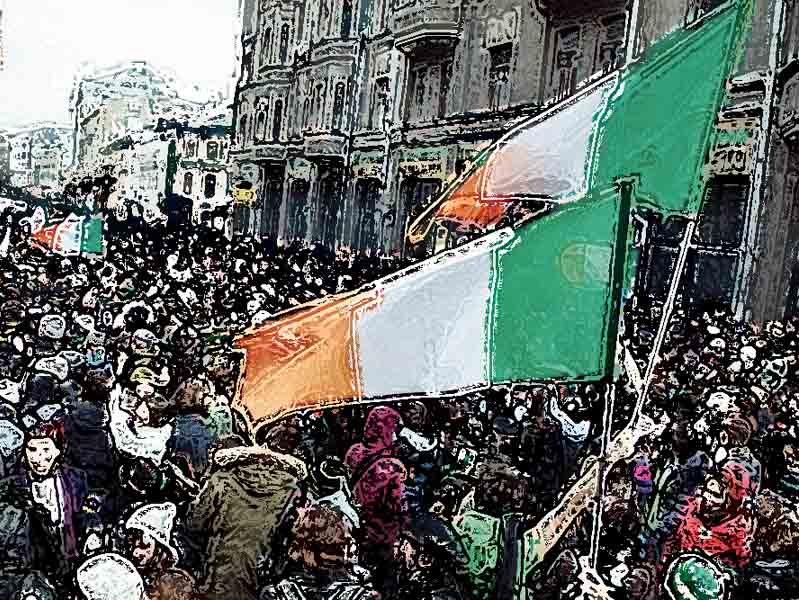 For many pipe bands, and the vast majority of them based in the United States, St. Patrick’s Day gigs and performing pub crawls are a significant source of annual revenue, and often crucial income to allow them to purchase gear and offset travel costs.

Many or even most municipalities are deterring or outright banning large gatherings in the shadow of the COVID-19 crisis. Never mind people bizarrely hoarding toilet paper, when Dublin and Boston last week cancelled their annual St. Patrick’s Day parades, things suddenly started to get real for the general population.

Now we know things are getting real.

While Highland bagpipes might have an Irish lineage, and are intrinsically Scottish, in most parts of the world, people identify the voluble and celebratory Highland pipes and pipe bands with St. Patrick’s Day fun. Highland pipers and drummers brush up their settings of “The Wearin’ o’ the

Green” and “Danny Boy,” but, counter-intuitively, it’s still the fan favourite “Scotland the Brave” that gets the crowd going.

Groups will divide and conquer, sending out mini-bands and quartets to cover as many pubs and street parties as possible. They’re usually paid gigs, but also can be mainly for the complementary drinks and fun, though almost all bands at the very least will pass around the hat for donations.

“There are a lot of bands that go out to play St. Patrick’s for the free booze,” said City of Regina Pipe-Major Iain MacDonald. “I think lots of American bands have it more figured out on the dollars side. We often take in $2,500 on the day. We’re trying to decide what people in the band want. Seems a no-brainer to cancel, but it is significant cash for the band and the venue is begging not to cancel because they are likely feeling the hit.”

“All of our booked gigs – including playing at the LA Kings NHL hockey game at Staples Center – have been called off, and our band has decided to also cancel all our pub crawls,” said Trevor Takahashi, pipe-major of the Grade 3 Pasadena Scottish in California. “As of now, we’re unsure of how we’ll make up for the nearly $10,000 we bring in on St Patrick’s Day. Outside of that there are also upcoming gigs in April/May that have been indefinitely postponed, and some upcoming games who are in the midst of determining whether or not to move forward.”

“Like most bands, we’re taking a hit to our bottom line, and there is a cascading effect,” said Pipe-Major Joe Brady of the Wake & District pipe band organization based in Raleigh, North Carolina. “We’re having the discussions as band on how to – or if – we work to make up shortfalls.”

Most competing pipe bands in North America will operate on a budget of at least $30,000 every year. Grade 1 bands, like the 78th Fraser Highlanders, Simon Fraser University, St. Thomas Alumni and City of Dunedin, which make annual journeys to Glasgow for the World Championships, will need a lot more, on the order of $100,000.

Fortunately, for Florida’s City of Dunedin, the St. Patrick’s Day hit doesn’t appear to be that great so far. With four competing bands in the organization, the March 17 celebrations are a major income source.

“Dunedin Pipe Band is still playing gigs this weekend, and on Tuesday,” Iain Donaldson, pipe-major of the Grade 1 band said. “We have only had one gig cancelled. All other events have adapted some changes to continue with their St. Patrick’s Day celebrations. We have four bands covering the Tampa Bay Area over the three days. The Grade 1 group is heading to Anna Maria today to play at a couple of local taverns. The band is only down $1,500, so it is still a very profitable three days for the organization. We are very grateful for the support from the surrounding communities, and around the state of Florida.”

“All that said, these are all essential fundraising opportunities that we rely on for the successful operation and growth of our bands, so we’re hoping to explore fundraising events that occur later in the year, assuming the world health landscape has improved by then,” the Pasadena Scots Takahashi added.

Wake & District’s Brady is optimistic. “Many of the pubs we play are already talking about a ‘St. Practice Day,’ or redo of some kind and we will work with them. We’re adopting a wait-and-see holding pattern for the short term. Not panicking to try to make up revenue.”

One thing is certain: the financial trickle-down effect of the COVID-19 pandemic will be felt by pipe bands, and thus the many contests to which they travel. Bands will have to get even more creative when it comes to raising funds and even practicing together.

Shotts Pipe-Major Emmett Conway said, “The band will continue to hold one to one and group sessions via Skype/Zoom and send recordings on a daily basis. We are taking it a week at a time and decide when it’s safe to return to practices.”

Pipers and drummers no matter what their level of ability will find a way, and at the very least keep their sense of camaraderie and humour.

UK and Ireland start to postpone events due to COVID-19 pandemic
March 12, 2020

Virus advice to pipers and drummers: keep to your instrument
March 10, 2020