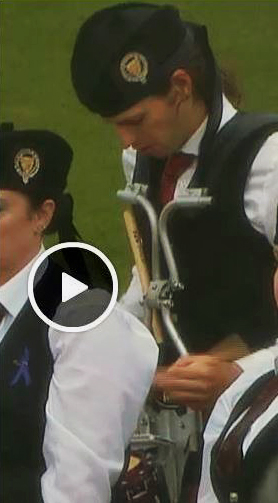 The readership analytics don’t lie. Perhaps surprising to most, the revelation that Grade 1 Los Angeles Scots snare drummer read from a score was our most-read news story of 2016. Richard Baughman, a former lead-drummer with the band, stepped in to fill out now-former Lead-Drummer Molly Steuber‘s corps at Glasgow Green, and used an ingenious rig to mount his iPhone on his drum. While Baughman was matter-of-fact about it, saying among other things that playing and participating is better than not, even if it means using a score, it was a topic of major conversation, challenging a tradition – but, with most associations, not a rule – that music must be played from memory. Whether new rules will be implemented to prohibit using music manuscripts is to be seen, and so far only the Eastern United States Pipe Band Association appears to spell out the ban on scores.

It was certainly a year of surprising and interesting developments in the piping and drumming world. Every one of the stories above was reported first by pipes|drums, with original comments and content.

What will 2017 bring? We look forward to finding out, and, as always, we will work to report the news as professionally, quickly and fairly as we are able.

Thanks to all readers for your faithful following of piping and drumming through pipes|drums, and Happy New Year!