Pipe Band of the Year

With 82% of the vote, the clear winner was Inveraray & District. And can anyone seriously dispute it? The band gained its second World Championship and, for good measure captured the Scottish and European Championships, and add to that RSPBA Champion of Champions aggregate awards in both the band and drumming categories. With Pipe-Major Stuart Liddell and Lead-Drummer Steven McWhirter – each awarded pipes|drums Piper and Drummer of the Decade honours, respectively – Inveraray’s future holds unlimited possibilities. We can’t wait to see what 2020 brings for this incredible band.

Field Marshal Montgomery – despite not winning an RSPBA major championship for the first time in many years, FMM were their usual stellar selves, producing another year of remarkably consistent sound that could well have gained an overall first under different circumstances.

Peoples Ford Boghall & Bathgate Caledonia – the West Lothian teaching machine came up the ranks in 2019, consistently making the prize lists at the big events. Momentum is clearly on the positive side for the Boggies. Watch this space.

ScottishPower – buoyed by two solid seconds at the British and Scottish championships, a drum section on the rise (evidenced by winning the Scottish Drumming Championship), and a standing-room only Pre-World’s Concert, it was a year of great success for ScottishPower.

Shotts & Dykehead Caledonia – another band re-ascending and impressing many with their musicality and orchestration under first-year Pipe-Major Emmett Conway, Shotts is making a strong case for World’s contention in the near future.

St. Laurence O’Toole – SLOT took the British and UK championships, and showed once again that they’re ready to recapture the World’s. With a drum section that would have cruised to a Champion of Champions award had it not been for an uncharacteristic sixth place at the Scottish, and a pipe section, Dublin’s finest had another great year. 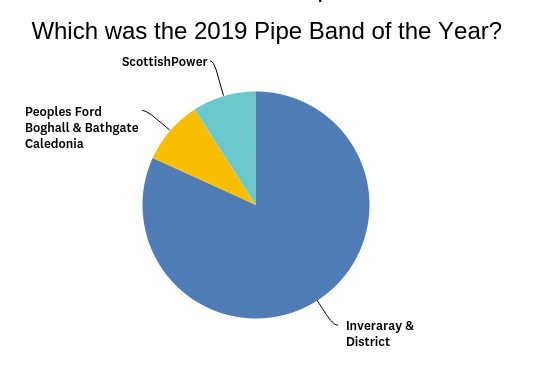