A ninth consecutive World Solo Drumming title, and tenth overall, a World Pipe Band Drumming Championship, a Champion of Champions Drumming award with his corps . . . 2019 was another spectacular year for McWhirter, who has been voted the pipes|drums Drummer of the Year six times before. The odds of him setting the World Solo Drumming record improved substantially, and, with 86% of the panellists’ votes, there was no doubt where our award would go.

Gordon Brown, Peoples Ford Boghall & Bathgate Caledonia – his continuing leadership, now into his fourth decade, of one of the world’s greatest corps and publishing an excellent collection of original drumming scores, made Brown a solid nominee.

Stephen Creighton, St. Laurence O’Toole – the SLOT corps continues to help bring the Dublin-based band to the top of the Grade 1 heap, and Creighton’s leadership is heralded worldwide. 2019 was no exception.

Jake Jørgensen, ScottishPower – with a drumming win at the Scottish and solid top-six finishes at the other for RSPBA majors, Jørgensen is finally getting his due for the commitment and hard work he and his corps have put in.

Jim Kilpatrick – despite being retired from competition, Kilpatrick was instrumental in 2019 for bringing out the new Axial line of instruments from the British Drum Co. The 16-time World Solo Drumming Champion continues to be a prodigious presence on the pipe band drumming stage. 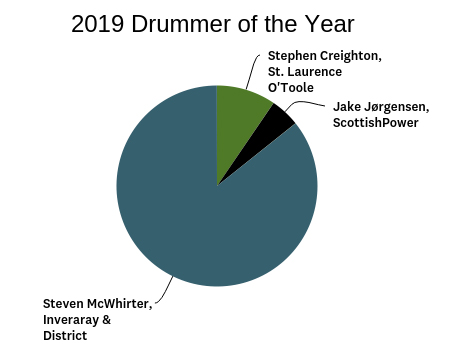