2019 Piping/Drumming Event of the Year

It’s the biggest week on the piping and drumming calendar, really about 200 events in one, and Piping Live! is again the Piping/Drumming Event of the Year, capturing 40% of the vote. There were several formidable events of the year, some within Piping Live! itself, but none so collectively made a statement like PL!19. The ROI for Glasgow is great, calculating nearly £2-million coming into the region’s coffers.

Capt. John A. MacLellan Memorial Dinner-Recital – little doubt that this is the most elegant event in piping and drumming, and each year tickets become more difficult to secure. This is what pipe music deserves.

Glenfiddich Invitational – a Highland piping fantasy come to reality, with the world’s 10 finest players competing in the great hall of a castle. Staged, emceed and stewarded with the meticulousness of a Swiss watch, no piping life is complete without at least one visit to Blair Atholl in October.

SP+R – the ScottishPower concert packed them in and had everyone on their feet. A show with amazing sound, lighting and orchestration, SP+R was the tour de force that all attending hoped it would be . . . and more.

Winter Storm – if anyone in, say, 1980 were to suggest that Kansas City would be the hub of piping and drumming for four days every year, they’d call them crazy. But like a fox, Winter Storm has staked a claim to just that, and the 2019 edition was better than ever.

World Pipe Band Championships – you know it, you love it, you’d love to see it be even better, and the 2019 World’s was great in-person, and perhaps even better via the free live stream. The world’s biggest pipe band event, warts and all, is an irresistible must-see event. 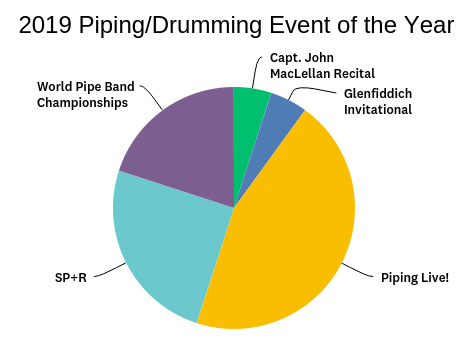 Congratulations to all of the winners and nominees on their impressive, prestigious success! Thank you to our panel of experts who lent their time and knowledge to selecting our winners.

Best wishes to all of our readers, subscribers and advertisers for a safe, healthy and prosperous 2019!