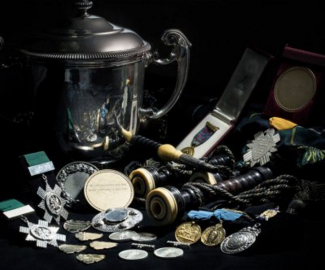 Harry, like many piping folk, was a little saddened to read that the great Donald MacPherson’s medals and trophies were to be auctioned off. Generally, that means that some deep-pocketed chap will have them and no one else will get to appreciate them. As it turned out, the prices asked were above what anyone wanted to pay, and that seemed a little sad, too. Far be it from me to condemn any estate’s decision to look after its money whatever way it sees fit, but here’s a wet Harry raspberry to the concept of monetizing history in general, of selling back and forth the material objects so precious to the culture and history of our instrument. Having said that, Harry has a nice collection of medals for sale and a pristine, vintage set of MacDougall of Lahore pipes once played by Dick Stand, the long-serving pipe-major of the Dundee Aunties Pipes & Drums. Check Harry’s eBay listing.

DONALD MACPHERSON MEDALS AND TROPHIES TO BE AUCTIONED